Arsenal take on Chelsea at the Emirates Stadium on Sunday afternoon. Here is the team Gooner Mac expects Mikel Arteta to select:

Arsenal take on Chelsea at the Emirates Stadium on Sunday afternoon. Here is the team Gooner Mac expects Mikel Arteta to select:

Goalkeeper: Bernd Leno is certain to keep his place between the sticks so Emi Martinez will once again be named on the bench.

Defence: Arsenal could be handed a major boost with Hector Bellerin tipped to make his return from a hamstring injury. If the Spaniard is passed fit then he should replace Ainsley Maitland-Niles at right-back against Chelsea.

Arteta still has limited options at left-back as Kieran Tierney and Sead Kolasinac remain injured so Bukayo Saka is expected to make his third consecutive start in the unfamiliar position tomorrow afternoon.

Calum Chambers returns from suspension and he should be given an immediate recall as Sokratis could miss out after being taken off against Bournemouth with a head problem. Rob Holding remains a doubt with a knee injury so David Luiz should keep his place in the Arsenal defence against his former club.

Midfield: Arteta played with a 4-3-3 formation in his first game so we could see Mesut Ozil playing in a slighter deeper role once again against Chelsea after impressing during the draw at Bournemouth.

Lucas Torreira played in the holding role to good effect at the Vitality Stadium so I expect the South American to retain his place with Granit Xhaka preferred ahead of Matteo Guendouzi in the third midfield position.

Dani Ceballos could be back in the Arsenal squad after recovering from a hamstring injury but he still lacks match fitness so a place on the bench is probably the best he can hope for tomorrow.

Attack: Gabriel Martinelli will need a late fitness test after missing Arsenal’s draw on Boxing Day with a thigh injury. If he’s ruled out then Pierre-Emerick Aubameyang is expected to be deployed on the left wing against Chelsea.

Alexandre Lacazette was wasteful against the Cherries last time out but he may get another chance to impress his new boss while Nicolas Pepe could come in for Reiss Nelson on the right-wing. 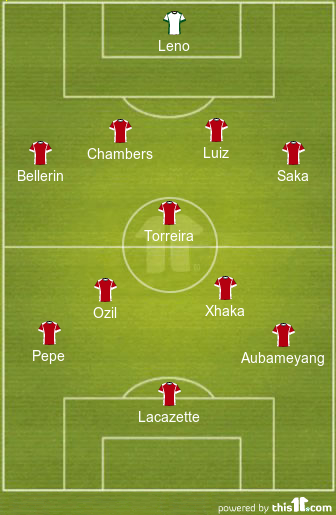