Liverpool take on Everton in the 3rd round of the FA Cup at Anfield on Sunday. Here is the team we expect Jurgen Klopp to select for the game:

Liverpool take on Everton in the 3rd round of the FA Cup at Anfield on Sunday afternoon. Here is the team we expect Jurgen Klopp to select for the game:

Goalkeeper: Alisson Becker is expected to be given a breather with Adrian recalled between the sticks this weekend.

Defence: Liverpool have just come out of a hectic period and Klopp has suggested he needs to rest some of his key players so I would be surprised if Trent Alexander-Arnold and Virgil van Dijk started on Sunday.

Joel Matip and Dejan Lovren remain out through injury so Klopp is going to have to rely on youth to fill the gaps. Ki-Jana Hoever could come in at right-back while Nat Phillips is an option in the middle of defence after returning from loan.

Midfield: I think we’ll see changes in midfield too with Jordan Henderson and Gini Wijnaldum given a rest but Naby Keita is certain to miss out after picking up a groin injury in the warm-up ahead of Thursday night’s win over Sheffield United.

James Milner should keep his place in the middle of the park while Adam Lallana is almost certain to be recalled. However, Liverpool will continue to be without the services of Fabinho and Alex Oxlade-Chamberlain due to injury.

Attack: Klopp is expected to rest some of his key attackers so I think Mohamed Salah will be given a breather while Roberto Firmino may also be given the night off having played a lot of minutes over the past month.

Divock Origi is almost certain to be recalled but Xherdan Shaqiri remains out with a thigh injury so teenage star Harvey Elliott is in-line to start having come off the bench to make his Premier League debut on Thursday night.

Curtis Jones is another option for Klopp but I think we’ll see Sadio Mane start to give Liverpool more threat in attack. New signing Takumi Minamino is available after completing his move from RB Salzburg and he’s expected to make his debut against Everton. 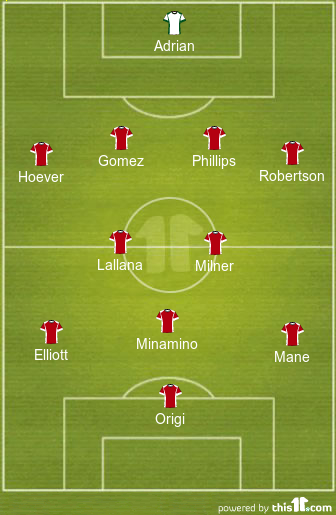