Arsenal get back to Premier League action when they take on Crystal Palace at Selhurst Park on Saturday lunchtime. Here is the team Gooner Mac expects Mikel Arteta to select:

Goalkeeper: Arsenal No.1 Bernd Leno is set for a recall after being rested for the FA Cup win over Leeds so Emi Martinez will make way.

Defence: Arteta has confirmed Hector Bellerin won’t be ready to return this weekend as he’s still working his way back from a hamstring injury that’s hampered him for the past month. Sokratis made a surprise appearance at right-back last time out but he looked uncomfortable so I’m expecting Ainsley Maitland-Niles to be recalled on Saturday.

That will allow Sokratis to move back into the middle of defence with Rob Holding dropping out as he looked rusty during Arsenal’s win over Leeds having only recently recovered from a knee injury. Shkodran Mustafi isn’t likely to be involved amid rumours he could leave this month.

Kieran Tierney remains on the sidelines recovering from shoulder surgery but thankfully Sead Kolasinac has made a swift recovery from an ankle knock and came through the Leeds game unscathed so he’ll start at left-back.

Midfield: Granit Xhaka is back in favour after peace talks with Arteta so he is likely to keep his place this weekend despite a poor performance in the FA Cup win over Leeds United.

The Swiss international certainly missed having Lucas Torreira alongside him on Monday night as Matteo Guendouzi doesn’t offer the same protection. However, I fully expect Torreira to resume his partnership alongside Xhaka at Palace after he was rested against Leeds.

Guendouzi will drop to the bench where he should be joined by Dani Ceballos as he was back in the matchday squad last time out after recovering from a hamstring injury.

Attack: Alexandre Lacazette played reasonably well against Leeds so he should keep his place up front despite extending his goalless run to six games with another blank on Monday night.

Arsenal will recall Pierre-Emerick Aubameyang after he was rested in the cup but he may start from the wing meaning Gabriel Martinelli has to settle for a place among the substitutes.

Mesut Ozil is expected to retain his place in the attacking midfield position following an upturn in form recently while Nicolas Pepe should keep his place on the right wing so Reiss Nelson may be named on the bench. 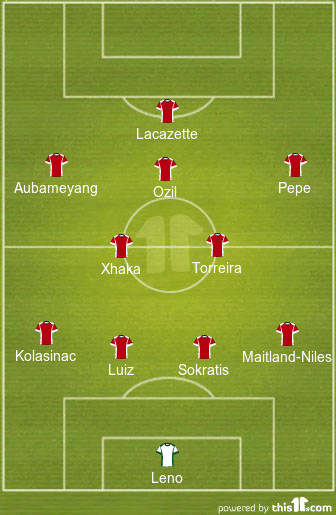