This is our match preview ahead of Tottenham’s clash with Liverpool at White Hart Lane including team news, line-ups and prediction

Liverpool will be looking to tighten their grip at the top of the table when they take on Tottenham at the new White Hart Lane this evening [5.30pm kick-off].

The Reds came through a tough December with their unbeaten run in tact and they booked their place in the fourth round of the FA Cup with a 1-0 win over Everton last weekend despite fielding an extremely weakened side.

Jurgen Klopp’s men head into the weekend action sitting 13 points clear of Leicester City with a game in hand having taken a staggering 58 points from a possible 60 so far this season so they can put one hand on the title with another win over Tottenham today.

However, Jose Mourinho would love nothing more than to end Liverpool’s unbeaten record and his Tottenham side are in desperate need for points as they battle to get themselves back in contention for a top four finish.

Spurs currently sit seventh in the division – six points off fourth-placed Chelsea – after losing at Southampton last time out in the league while they were held to a 1-1 draw at Middlesbrough in the FA Cup last weekend so Mourinho will be keen to get back to winning ways.

Tottenham will be without Harry Kane after their talisman was ruled out until April with a serious hamstring injury so Mourinho has to figure out how to fill the void up front during his absence over the coming months.

Moussa Sissoko is also facing a spell on the sidelines with a knee ligament injury so he joins Tanguy Ndombele on the treatment table. Ben Davies and Hugo Lloris are close to returning to action but this game will come too soon, however, Danny Rose could be back from a calf injury.

Liverpool have their own injury concerns to worry about as they’ve confirmed James Milner misses out with a hamstring injury while Naby Keita has also been ruled out with a groin problem.

Joel Matip is back in light training after recovering from a knee injury while Fabinho and Dejan Lovren are expected to resume training next week but the trip to Tottenham comes too soon for the trio.

However, Klopp is able to call upon Xherdan Shaqiri again after the Swiss international overcame a thigh injury that’s kept him out of action in recent games. 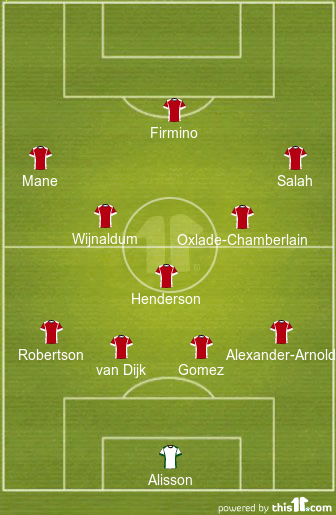 Tottenham 1-1 Liverpool: Tottenham have won just one of their last 14 meetings with Liverpool in the Premier League and they’ve lost three of the last six on home soil. Obviously Liverpool are on a formidable run right now and Kane will be a huge miss for Tottenham so if anyone is going to win I have to favour the visitors.

However, this is the type of game Mourinho thrives in and I think he’ll set his team up to frustrate Liverpool. I expect a cagey game but have a  feeling Tottenham will get something so I’m going for a 1-1 draw.