This is our match preview ahead of Man Utd’s Premier League clash with Burnley at Old Trafford including team news, line-ups and prediction

Manchester United will look to close in on the top four when they take on Burnley at Old Trafford tonight [8.15pm kick-off].

Ole Gunnar Solskjaer was pleased with how well his side competed during their defeat to Liverpool on Sunday afternoon as United were right in the game until Mohamed Salah scored a late second to seal a 2-0 win at Anfield.

The defeat left Man Utd sitting fifth in the Premier League table but the Red Devils were handed a major boost on Tuesday night when 10-man Arsenal held Chelsea to a 2-2 draw at Stamford Bridge.

It means United can close the gap on fourth-placed Chelsea to just three points with victory over Burnley this evening and it would blow the race for Champions League qualification wide open.

However, Man Utd shouldn’t take anything for granted as Burnley head to Old Trafford in confident mood following their impressive 2-1 win over Leicester City at the weekend so Sean Dyche’s men will be looking to cause another upset this evening.

United will continue to be without Marcus Rashford as the striker is facing a spell on the sidelines after fracturing his back against Wolves last week so Mason Greenwood should get another chance in attack.

Victor Lindelof is a major doubt for the game after being sent home from training due to illness this week so Phil Jones could come in to the back four. Eric Bailly is another option for Solskjaer but he’s lacking match fitness having only recently returned from a long-term injury.

Paul Pogba remains on the sidelines with an ankle injury while Scott McTominay is still out with a knee problem. Axel Tuanzebe is getting closer to fitness but this game comes too soon for the defender.

Burnley will be without striker Ashley Barnes for the game after he underwent surgery on a hernia while Johann Berg Gudmundsson remains on the sidelines with a hamstring problem. 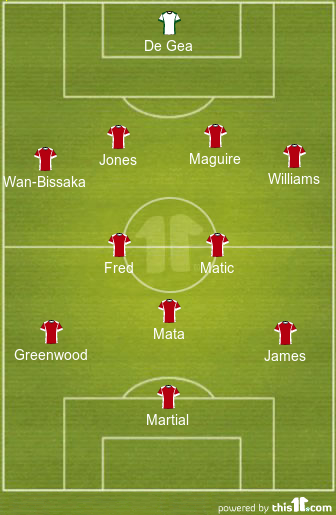 Man Utd 2-0 Burnley: United won the reverse fixture 2-0 at Turf Moor last month and haven’t lost any of the last 15 home league meetings – although they have drawn the last three against the Clarets at Old Trafford. Solskjaer will be concerned about Man Utd’s inconsistent form and Burnley showed with the win over Leicester they can be a dangerous side. However, this is a great opportunity for United to close the gap on Chelsea and I don’t see them passing it up. I’m going for a routine 2-0 home win tonight.