Arsenal take on Bournemouth in the fourth round of the FA Cup on Monday night. Here is the team Gooner Mac expects Mikel Arteta to select:

Arsenal take on Bournemouth at the Vitality Stadium in the fourth round of the FA Cup on Monday night. Here is the team Gooner Mac expects Mikel Arteta to select:

Goalkeeper: Arsenal No.1 Bernd Leno is expected to be rested with Emi Martinez given another chance to impress in the cup.

Defence: Arteta will be without David Luiz as he’s suspended following his sending off against Chelsea on Tuesday night but Sokratis is set for a recall after recovering from illness. Rob Holding could also be given a run out as he bids to build-up his match fitness following a serious knee injury so Shkodran Mustafi should make way.

Arsenal continue to be without Sead Kolasinac due to a thigh injury while Kieran Tierney is still recovering from shoulder surgery so Bukao Saka is set to continue at left-back. Hector Bellerin scored a dramatic equaliser against Chelsea last time out but he could be rested with Ainsley Maitland-Niles recalled at right-back tomorrow night.

Midfield: Lucas Torreira should keep his place in the holding role against Bournemouth but Matteo Guendouzi is pushing for a recall after being named on the bench in recent games so Granit Xhaka may get a rest.

Dani Ceballos is reportedly looking to end his loan spell early after a frustrating 6 months but Arsenal aren’t likely to let him leave without a fight and I think this game is a good chance to give the Spaniard some much-needed minutes.

Attack: If Ceballos does start tomorrow evening then Mesut Ozil is the man expected to drop out with the German international given a rest. Ozil hasn’t been at his best in recent games so hopefully a breather will do him good.

Arsenal are still without Pierre-Emerick Aubameyang as he’ll serve the final game of his three-match suspension so Gabriel Martinelli is expected to continue on the left wing and he’ll be in confident mood following his superb goal against Chelsea.

Reiss Nelson remains out with a hamstring injury that’s expected to keep him on the sidelines until mid-February so Nicolas Pepe is likely to keep his place on the right wing against Bournemouth.

Alexandre Lacazette has been struggling in front of goal in recent weeks and I think he could actually do with a rest but Arteta has suggested he’ll take the FA Cup seriously so I don’t see him leaving Laca out. Eddie Nketiah is an option but I think he’ll be on the bench. 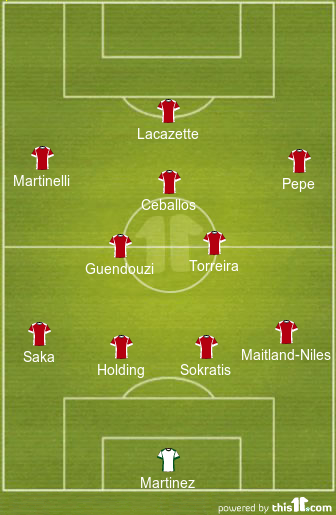