Arsenal travel to Turf Moor on Sunday to take on Burnley in the Premier League. Here is the team Gooner Mac expects Mikel Arteta to select:

Arsenal travel to Turf Moor on Sunday afternoon to take on Burnley in the Premier League. Here is the team Gooner Mac expects Mikel Arteta to select:

Goalkeeper: Arsenal No.1 Bernd Leno is expected to be recalled after being rested for the FA Cup win at Bournemouth last Monday night. Emi Martinez will drop to the bench.

Defence: Arteta boosted his options in defence during the window with Pablo Mari and Cedric Soares arriving on loan. Soares is still recovering from a knee injury so won’t be involved tomorrow and I don’t think Mari will come straight into the squad as he’s only had a couple of days training with his new team mates.

Arsenal welcome David Luiz back from suspension so he should be recalled alongside Sokratis with Shkodran Mustafi ruled out with an ankle injury. Rob Holding is likely to be named on the bench but Calum Chambers won’t play again this season due to a knee ligament injury.

Sead Kolasinac faces a late fitness test after making a swift recovery from a thigh injury but Arteta may not risk him from the start as Bukayo Saka has done well filling-in at left-back. Hector Bellerin is fully fit so he should retain his place at right-back with Ainsley Maitland-Niles missing out.

Midfield: Arsenal are likely to make a change in midfield with Lucas Torreira recalled after he was rested for the FA Cup win over Bournemouth at the Vitality Stadium last week.

Matteo Guendouzi is the man set to make way as Granit Xhaka has played his way back into the first team after overcoming his bust-up with the fans so he should keep his place in the middle of the park.

Dani Ceballos is still an Arsenal player following reports he wanted to leave in January so it will be interesting to see how he’s used over the coming weeks after seemingly falling out of favour but I don’t think the Spaniard will start at Burnley tomorrow.

Attack: Arsenal will welcome Pierre-Emerick Aubameyang back into the squad after he served his three-match suspension and we could see the Gabon hitman leading the line up front at Turf Moor.

Gabriel Martinelli has been superb lately and deserves to keep his place on the left wing so Alexandre Lacazette may be the man to make way for Aubameyang. The Frenchman has struggled in front of goal in recent weeks so I think we’ll see him on the bench this weekend.

Reiss Nelson is still working his way back to full fitness following a hamstring injury so Nicolas Pepe should continue on the right wing while Mesut Ozil is set to come in for Joe Willock in the attacking midfield role after being rested against Bournemouth. 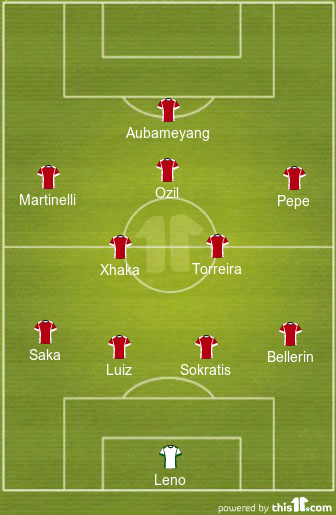