Arsenal take on Olympiacos in Greece on Thursday night. Here is the team Gooner Mac expects Mikel Arteta to select:

Arsenal will be looking to bring home a positive result from the first leg of their Europa League last-32 tie with Olympiacos in Greece on Thursday night. Here is the team Gooner Mac expects Mikel Arteta to select:

Goalkeeper: Arsenal No.1 Bernd Leno is set for a rest as Emi Martinez is expected to be recalled as he’s played throughout the Europa League campaign this season.

Defence: Arteta could make changes in defence too as Sead Kolasinac is pushing for a recall and could replace Bukayo Saka at left-back while Ainsley Maitland-Niles could come in at right-back to give Hector Bellerin a rest.

Arsenal suddenly have plenty of options in the middle of defence as Pablo Mari is available after coming through a run-out with the U23’s on Monday while Rob Holding is also pushing for a recall. However, I think it will be Sokratis who comes in alongside David Luiz with Shkodran Mustafi making way.

Midfield: Arsenal have been handed a blow ahead of the game with the news that Lucas Torreira hasn’t made the trip to Greece due to illness. There’s a slight chance he may travel on his own if his condition improves over the coming hours but that appears unlikely.

Matteo Guendouzi is set to return to the squad but he may have to settle for a place on the bench after being axed for the win over Newcastle following a bust-up with Arteta during our training camp in Dubai.

Dani Ceballos should keep his place after an impressive performance during the 4-0 win over Newcastle at the weekend while Granit Xhaka is expected to once again start in the middle of the park.

Mesut Ozil has been ruled out of the game against Olympiacos after being granted leave to attend the birth of his newborn baby so Joe Willock could come in for the German playmaker in the advanced attacking midfield role.

Attack: Alexandre Lacazette will be hoping for a recall after coming off the bench to score and grab an assist at the weekend. Eddie Nketiah is the man set to make way after failing to grasp his opportunity on Sunday.

Gabriel Martinelli is another option for Arsenal but Pierre-Emerick Aubameyang is likely to keep his place on the left side of attack. Reiss Nelson is back in contention after recovering from injury but Nicolas Pepe should keep his place on the right-wing after an excellent performance at the weekend. 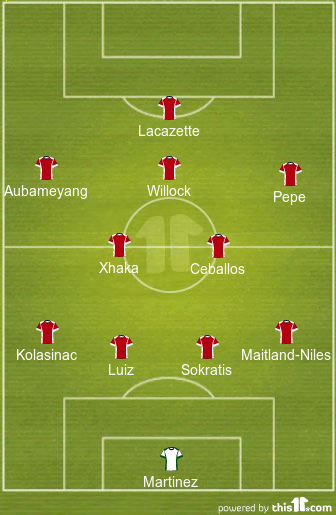