This is our match preview ahead of Arsenal’s clash with Portsmouth at Fratton Park including team news, line-ups and prediction

Arsenal travel to Fratton Park to take on Portsmouth in the fifth round of the FA Cup this evening.

Mikel Arteta has called on his players to respond and keep their season alive following Thursday night’s shock Europa League exit at the hands of Olympiacos with the Greek outfit progressing on away goals following a 2-1 win at the Emirates.

We appeared to have been gathering some momentum under Arteta heading into the Olympiacos game so the defeat came as a huge setback and it’s left us battling to salvage something from a hugely disappointing season.

Arsenal currently sit 10th in the Premier League table – eight points adrift of the top four with a game in hand – and although Chelsea have left the door open for a Champions League qualification place, the FA Cup is our only chance of silverware.

Obviously we have a great history in the competition but Portsmouth away is going to be a tricky test as they are flying high in third position in League One so the Arsenal players shouldn’t underestimate the task at hand.

Arsenal will be without Sead Kolasinac for the next month as the full-back has been ruled out with a shoulder injury while Calum Chambers remains on the sidelines with a serious knee injury.

Kieran Tierney and Cedric Soares are expected to return to full training soon as they bid to recover from shoulder and knee injuries respectively but they’ll remain unavailable for selection this evening.

Arteta is expected to freshen things up with the likes of Pierre-Emerick Aubameyang, Alexandre Lacazette, Granit Xhaka and Mesut Ozil rested. Emi Martinez could start in goal while Ainsley Maitland-Niles, Sokratis and Rob Holding are pushing for recalls in defence.

Gabriel Martinelli, Reiss Nelson, Joe Willock, Lucas Torreira, Matteo Guendouzi and Eddie Nketiah are also expected to feature at some point for the Gunners this evening.

As for Portsmouth, they’ll make late decisions over the fitness of Ronan Curtis and Tom Naylor after they picked up knocks during the 3-0 win over Rochdale on Friday night. 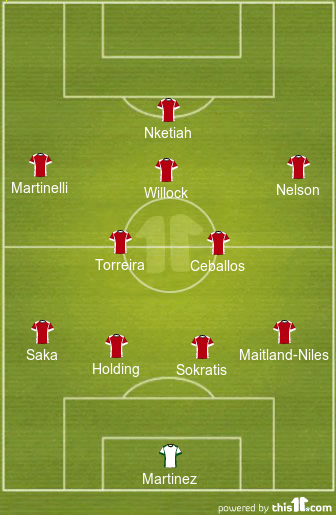 Portsmouth 1-2 Arsenal: We’ve won the FA Cup more than any other team and Arteta will be keen to maintain our excellence in the competition having lifted the trophy as an Arsenal player. The boss will be hoping Thursday’s display was just a blip as we’ve been making steady progress in recent weeks and defeat tonight would be a disaster.

I fully expect a tough game against a Portsmouth side who have a formidable home record as they’ve won their last 10 games at Fratton Park in all competitions and haven’t lost there since mid-August. However, Arsenal cannot afford to lose this evening and I’m backing the boys to edge it 2-1 to book our place in the quarter-finals.