Tottenham welcome Norwich to North London on Wednesday night in the fifth round of the FA Cup. Here is the side we think Jose Mourinho will select

Tottenham welcome Norwich City to North London on Wednesday night in the fifth round of the FA Cup. Here is the side we think Jose Mourinho will select for the game:

Goalkeeper: Hugo Lloris has been ruled out once again as he continues to recover from a groin issue that kept him out of the defeat to Wolves. Therefore, Paulo Gazzaniga is expected to continue in goal.

Defence: Mourinho has gone with a back three/five in the last two games but it hasn’t worked as Spurs conceded five goals during consecutive defeats to Chelsea and Wolves. The Tottenham boss is now being tipped to revert to a flat back four against Norwich which could see Toby Alderweireld and Jan Vertonghen recalled after being on the bench on Sunday.

Serge Aurier was on the score-sheet at the weekend and he could keep his place at right-back while Ben Davies is likely to remain at left-back with Japhet Tanganga, Eric Dier and Davinson Sanchez dropping to the bench.

Midfield: Tottenham are expected to freshen things up in midfield with Tanguy Ndombele pushing for a recall after he was named on the bench against Wolves on Sunday afternoon.

Gedson Fernandes is another player who’ll be hoping to feature but I think the January signing will have to settle for a place on the bench as Harry Winks should keep his place after captaining Tottenham at the weekend.

Giovani Lo Celso is also expected to start for Spurs tomorrow night but Moussa Sissoko is still working his way back to full fitness from a knee injury so Oliver Skipp could keep his place on the bench.

Attack: Tottenham will once again be without the services of Harry Kane as he continues to recover from hamstring surgery while Hueng-min Son is also not ready to return from his broken arm just yet.

Steven Bergwijn is expected to continue up front with Lucas Moura offering support and youngster Troy Parrott will be on the bench. Ryan Sessegnon is back in contention after overcoming a muscle issue but he may have to settle for a place among the substitutes.

Erik Lamela faces a late fitness test as he bids to return from a knock but a place on the bench is probably the best he can hope for so Dele Alli should keep his place in the Tottenham attack. 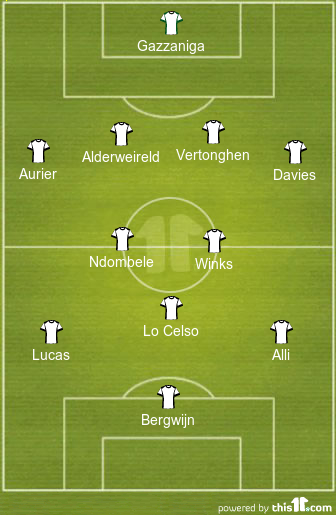