Tottenham take on RB Leipzig in the second leg of their Champions League last-16 tie this evening. Here is the side we think Jose Mourinho will select

Tottenham are in Germany to take on RB Leipzig in the second leg of their Champions League last-16 tie this evening. Here is the side we think Jose Mourinho will select for the game:

Goalkeeper: Hugo Lloris made a successful return to action during the 1-1 draw at Burnley on Saturday so the Frenchman is expected to keep his place between the sticks tonight with Paulo Gazzaniga on the bench.

Defence: Tottenham have been switching between a back four and a back five in recent weeks so it will be interesting to see how Mourinho sets-up this evening. As Spurs need a win having lost the first leg 1-0, the Portuguese coach may be tempted to play a back four with Eric Dier moving into midfield where he can drop back into defence if needed.

Davinson Sanchez and Toby Alderweirled are expected to keep their places in the middle of defence while Jan Vertonghen should continue at left-back as Ben Davies has been ruled out through injury.

Serge Aurier was rested for Tottenham’s trip to Turf Moor at the weekend so the Ivory Coast international is set for a recall tonight with Japhet Tanganga dropping back to the subs bench.

Midfield: As I’ve said, I think we could see Dier deployed in the defensive midfield position to start with as that would give Mourinho the flexibility to drop him into a back three if needed.

I think it’s safe to say Tanguy Ndombele will be dropped this evening after Mourinho savaged him for his performance at the weekend while Oliver Skipp may miss out despite putting in some encouraging displays lately.

Harry Winks should be recalled in the Tottenham midfield as he’s been a key player for the north Londoners lately and he was rested for the trip to Burnley at the weekend in order to save him for tonight’s clash with Leipzig.

Giovani Lo Celso was also protected on Saturday so I expect him to come-in alongside Winks and Dier with Gedson Fernandes named among the subs. Moussa Sissoko is still working his way back to full fitness from a knee injury.

Attack: Tottenham’s woes in attack deepened yesterday after it was confirmed Steven Bergwijn is unlikely to play again this season after picking up an ankle injury so he joins Harry Kane and Hueng-min Son on the sidelines.

Dele Alli is therefore expected to continue as a make-shift ‘false 9’ up front with Erik Lamela keeping his place on the wing. Lucas Moura should be recalled after being rested on Saturday so Ryan Sessegnon may have to settle for a place among the subs. 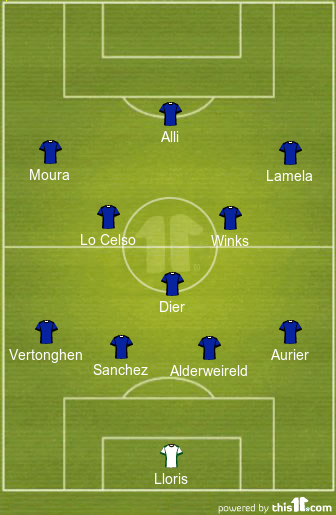