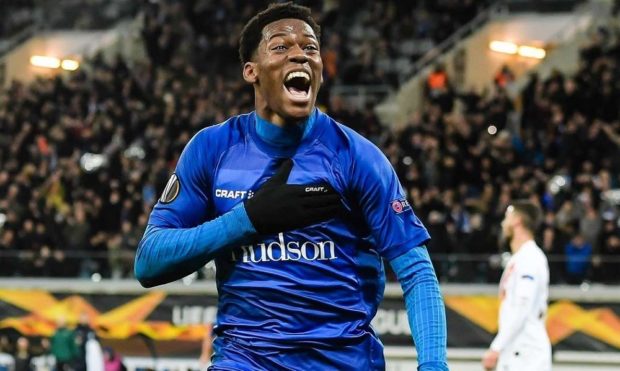 Arsenal and Manchester United have opened talks with the agent of Jonathan David as the Premier League duo eye a summer swoop for the £23m-rated Gent hitman, according to reports in Belgium via the Daily Star.

David has developed into one of the most exciting players outside of the big five leagues since joining Gent in 2018 and the youngster was enjoying a superb campaign having scored 23 goals in 40 games before football was suspended in March.

The 20-year-old has also made his mark at senior international level after netting 11 times in just 12 caps for Canada and it appears his potential has caught the eye of major clubs here in the Premier League.

The Daily Star are citing a report from HLN that claims Arsenal and Manchester United have both expressed their interest in David and have now opened talks with his agent, Nick Mavromaras, about a possible move this summer.

The Belgian outlet suggests that Arsenal and United have been tracking David’s progress for several months but will face stiff competition from throughout Europe as the likes of Everton, Ajax, Inter Milan and Porto are also keen on the striker.

Gent are determined not to lose their star man on the cheap but the Daily Star says the Belgian Pro League side will cash-in if £23m is put on the table – although no official offer has been received as yet.

David has three years left on his current contract but he’s previously expressed his desire to test himself in England so I’m sure he’d jump at the chance of joining Arsenal or Man Utd if either club could get a deal agreed for his services.

The Gunners are expected to be in the market for a new striker this summer as Pierre-Emerick Aubameyang is being tipped to leave the Emirates Stadium . The Gabon hitman has just one year left on his contract and is showing no sign he’ll pen a new deal so Arsenal will need to sell this summer or risk losing him for nothing.

Money is going to be tight in north London – especially if Arsenal miss out on European football – so David could appeal to Mikel Arteta as his reported £23m fee is reasonable for a player of his potential.

However, Arsenal could face stiff competition from Manchester United as Ole Gunner Solskjaer is also being tipped to strengthen his forward options this summer and the Norwegian coach is seemingly also keen on signing the Gent hitman.