This is our match preview ahead of Arsenal’s Premier League clash with Brighton at the Amex including team news, line-ups and prediction

Arsenal desperately need to get back to winning ways when they take on Brighton at the Amex Stadium this afternoon.

The Gunners returned to action in midweek but it was a night to forget after crashing to a 3-0 defeat to Manchester City at the Etihad Stadium in a game that saw David Luiz sent off early in the second half after giving away a penalty.

Arsenal remain ninth in the Premier League table and are eight points adrift of the top four with nine games remaining so they desperately need a win on the south coast this afternoon if they’re to make a late push for a European qualification place.

However, the north Londoners will be up against a Brighton side who are also in dire need of a win as they sit 15th in the table and are just two points outside the bottom three having won just six of their 29 league games so far this season.

Boss Graham Potter will hope the enforced three-month break has re-focused his squad as they look to end the season strongly to secure their top flight status for another year.

Arsenal have huge problems in defence as Pablo Mari has been ruled out for the rest of the season after picking up a serious Achilles injury on Wednesday night while Luiz will start a two-game ban following his dismissal.

Sokratis is still on the sidelines with a thigh injury and Calum Chambers is still working his way back to fitness from knee surgery so Arteta has little option other than to recall Rob Holding alongside Shkodran Mustafi.

The Gunners also have issues in midfield as Granit Xhaka misses the trip to the south coast with an ankle injury and Lucas Torreira is yet to resume full training following an ankle ligament injury that he suffered earlier this year.

Cedric Soares is still out with a broken nose but Mesut Ozil will be hoping for a recall after being axed for the defeat at Man City while the likes of Alexandre Lacazette, Gabriel Martinelli, Nicolas Pepe and Reiss Nelson are all options for Arteta in attack if he wants to freshen things up.

Brighton have virtually a fully-fit squad to choose from as Aaron Connolly is available again after recovering from a knee operation. Jose Izquierdo is therefore Brighton’s only absentee with the winger still out with a knee issue. 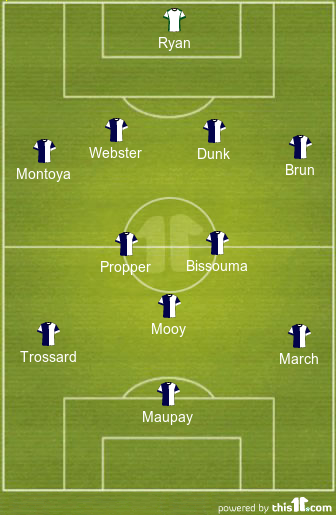 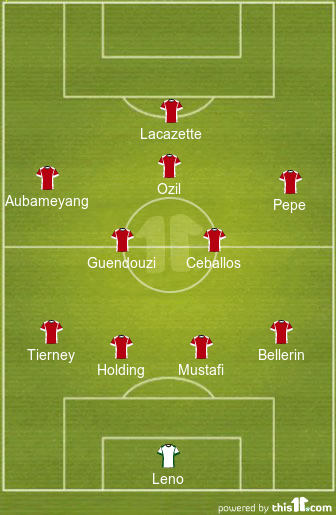 Brighton 1-2 Arsenal: Arsenal haven’t beaten Brighton in the last four meetings between the two clubs and have won just one of their last seven league away games against clubs on the south coast. The Gunners have a poor record on the road this season and this won’t be easy against a Brighton side who’ve taken points off the likes of Tottenham, Everton and Chelsea on home soil.

However, Arteta’s men desperately need to get back to winning ways after Wednesday’s disappointment and they are still a dangerous side on their day. As long as Arsenal cut out the silly mistakes and errors in defence, I can see them taking a narrow 2-1 win back to north London this afternoon.