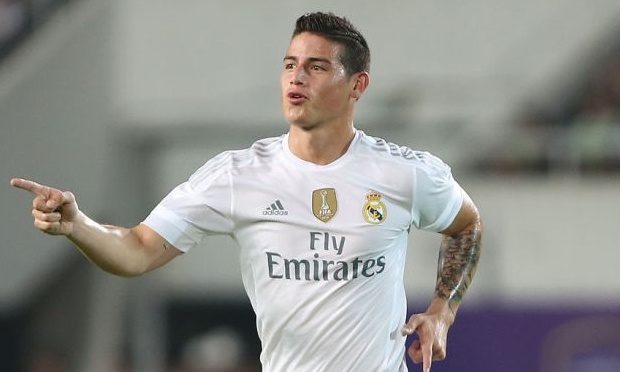 Arsenal and Manchester United are among a host of clubs showing a keen interest in signing James Rodriguez as Real Madrid look to sell the attacker for just £22.6m this summer, according to Marca via the Mirror.

Rodriguez burst onto the scene with a string of impressive displays for Colombia at the 2014 World Cup which earned him a dream move to Real Madrid but he struggled to live up to the hype during his time in Spain.

The 28-year-old was eventually shipped out on a two-year loan to Bayern Munich between 2017 and 2019 but returned to the Bernabeu last summer after the Bundesliga champions opted against making the deal permanent.

The South American has struggled to force his way into Zinedine Zidane’s plans this season having made just 1 La Liga appearance in the last nine months and the majority of his game-time has come in the domestic cups.

It seems Rodriguez is fed up with his lack of action as Zidane is quoted in the Daily Mail today as claiming the attacker refused to travel with the rest of the squad for Madrid’s game at Athletic Bilbao on Sunday night.

That could spell the end of his time at the Spanish giants as the Mirror are citing Marca as claiming that Rodriguez has made it clear he wants to leave this summer and Madrid are ready to cut their loses.

Rodriguez has just one year left on his contract so the Spanish outlet says Madrid will sell in a cut-price deal worth just £22.6m [€25m] rather than risk losing the player for nothing in 12 months time.

The situation has alerted clubs here in the Premier League as Marca says Arsenal and Manchester United are keen on bringing Rodriguez to England while Everton and Wolves are also keeping a close eye on developments.

Gunners boss Mikel Arteta needs to strengthen his squad this summer following a disappointing season and they’ve lacked creativity in the final third at times so Rodriguez could be the man to add some spark back into the Arsenal attack.

However, Ole Gunnar Solskjaer is also expected to be active in the market as he looks to turn Man Utd into title challengers again and it appears the Manchester giants are also interested in signing the Colombian international.

Rodriguez can play anywhere across the attacking midfield positions and has bags of quality when he’s playing to the best of his ability so he could be a very useful addition for Arteta or Solskjaer.

His career has stalled but Rodriguez could prove to be a shrewd piece of business for Arsenal or Man Utd if either club can get a deal secured for his signature and get him back playing with confidence again.