Liverpool take on Brighton & Hove Albion at the Amex Stadium on Wednesday night. Here is the team we expect Jurgen Klopp to select for the game:

Goalkeeper: Alisson Becker is certain to keep his place between the sticks tomorrow night so Adrian will have to settle for a place among the substitutes once again.

Defence: Liverpool will assess the fitness of Andrew Robertson after he was forced off during the win over Aston Villa on Sunday with a calf issue. However, it was only a dead leg so the Scottish international is expected to be fit to start tomorrow.

Joel Matip won’t play again this season after being ruled out with a toe injury while Dejan Lovren remains a doubt after missing the last two games with a knock that he picked up in training last week.

Therefore, Joe Gomez will continue alongside Virgil van Dijk in the middle of the Liverpool back four while Trent Alexander-Arnold should continue at right-back. Youngster Neco Williams could be on the bench for the third consecutive game.

Midfield: Klopp rotated his midfield against Villa at the weekend and we should see a couple of changes again tomorrow. Jordan Henderson is set to be recalled after being a substitute on Sunday with Alex Oxlade-Chamberlain making way.

Gini Wijnaldum is also expected to come back into the Liverpool side meaning Naby Keita could drop back to the bench despite a positive showing against Aston Villa that included a lovely assist for the opening goal.

James Milner wasn’t risked at the weekend due to a thigh injury so it remains to be seen whether he’ll be back in the squad tomorrow night but Curtis Jones should keep his place on the bench after scoring on Sunday.

Attack: Klopp gave Roberto Firmino a breather last time out so the Brazilian international should be recalled up front against Brighton. Divock Origi failed to take his chance to impress on Sunday so I expect he’ll drop out.

Sadio Mane was among the goals again at the weekend and he should keep his place in the Liverpool attack while Mohamed Salah is once again expected to retain his spot on the right wing.

Xherdan Shaqiri was back in the squad on Sunday after recovering from a calf injury so he’ll be an option for Klopp along with Takumi Minamino and Harvey Elliott- who’ll be hoping to feature after signing a new contract. 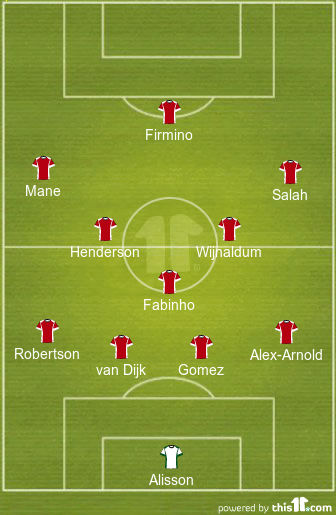