Manchester United take on Aston Villa at Villa Park this evening. Here is the line-up we think Ole Gunnar Solskjaer will select for the game:

Goalkeeper: David De Gea conceded twice during the 5-2 victory over Bournemouth at the weekend but the Spaniard should keep his place in goal tonight with Sergio Romero remaining on the bench.

Defence: Victor Lindelof is a doubt for the game this evening after being forced off with a back injury on Saturday. Eric Bailly is on stand-by to deputise alongside Harry Maguire in the middle of defence if Lindelof is ruled out.

Aaron Wan-Bissaka has enjoyed some fine form lately and he should continue at right-back. Luke Shaw has cemented himself as Man Utd’s first choice left-back and he’s likely to keep his place once again this evening with Brandon Williams on the bench.

Phil Jones is facing a race against time to play again this season while Axel Tuanzebe won’t be back until September so Solskjaer doesn’t have too many other defensive options to call upon.

Midfield: Manchester United could make a change in midfield with Scott McTominay pushing for a recall having been left out in recent weeks. Nemanja Matic has performed superbly well since the restart but he might be given a rest tonight with McTominay coming in meaning Fred may be forced to sit on the bench again.

Paul Pogba has said he’s fit and happy at United amid reports he could sign a new contract so his situation certainly looks a lot more promising than it did a few months ago. The Frenchman is forming an exciting partnership with Bruno Fernandes and he should keep his place in midfield against Villa.

Fernandes continued his excellent start to life at Old Trafford with another goal at the weekend so he should continue in the attacking midfield position this evening so Juan Mata and Andreas Pereira will have to settle for places on the bench.

Attack: Mason Greenwood was outstanding against Bournemouth and got himself another two goals but Solskjaer will want to protect the teenager so I wouldn’t be surprised to see him given a rest tonight.

Daniel James is the man most likely to come in on the right wing if Greenwood is rested while Marcus Rashford should keep his place on the opposite side of the Man Utd attack.

Odoin Ighalo is pushing for a recall up front but Anthony Martial is in a fine run of form having scored again at the weekend so he should keep his place through the middle against Villa. 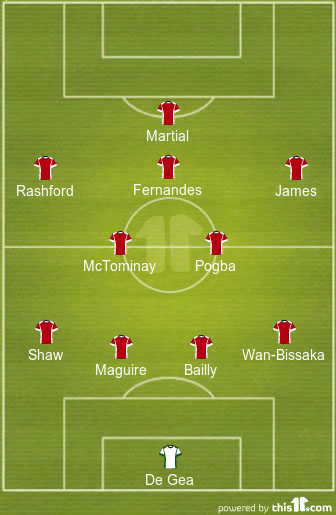