Manchester United take on Crystal Palace at Selhurst Park on Thursday evening. Here is the line-up we think Ole Gunnar Solskjaer will select for the game:

Goalkeeper: David De Gea conceded twice during the draw with Southampton but the Spaniard is still expected to keep his place between the sticks so Sergio Romero will remain among the substitutes.

Defence: Solskjaer has suggested he’ll freshen things up against Palace after naming an unchanged line-up for several games and there could be a change at left-back as Luke Shaw is a major doubt after being forced off with an ankle injury on Monday night.

Shaw’s replacement against Southampton, Brandon Williams, also picked up a knock in that game after suffering a nasty cut above his eye but Man Utd hope he’ll be fit to start at left-back tomorrow evening.

Aaron Wan-Bissaka should keep his place at right-back ahead of Diogo Dalot while Harry Maguire should once again start despite question marks over his performance against Southampton. However, Eric Bailly is pushing for a recall and could replace Victor Lindelof in the middle of defence.

Midfield: Manchester United are expected to make at least one change in midfield with Nemanja Matic dropping out. Scott McTominay is the man most likely to come in for the Serbian.

Solskjaer may be tempted to give Paul Pogba a rest ahead of Sunday’s FA Cup semi-final against Chelsea but it’s vital United beat Palace to maintain hopes of finishing in the top four so I think the Frenchman will start tomorrow.

The same goes for Bruno Fernandes as the Portuguese international has been a key figure in Man Utd’s recent good form so he should keep his place in the attacking midfield position with the likes of Juan Mata and Andreas Pereira on the bench.

Attack: Mason Greenwood is a major doubt after suffering an ankle injury against Southampton so Daniel James could get a recall on the right side of the Man Utd attack tomorrow night.

Marcus Rashford was back among the goals on Monday and he could keep his place on the left wing while Anthony Martial should be in confident mood after scoring a superb goal against the Saints.

Ideally the pair would be rested for the Chelsea game but Solskjaer can’t take too many risks so I expect Rashford and Martial to start meaning Odion Ighalo will have to make-do with a place on the bench. 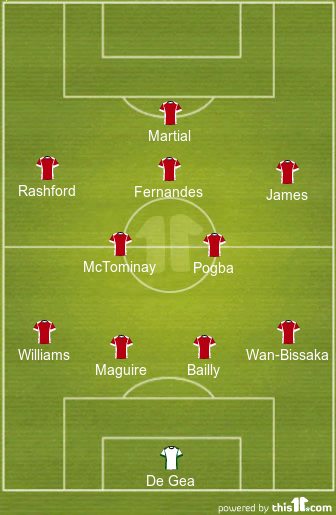