Chelsea take on Manchester United in the semi-finals of the FA Cup on Sunday evening. Here is the team we expect Frank Lampard to select for the game:

Goalkeeper: Willy Caballero has started in the previous rounds of the FA Cup so he’s expected to be recalled on Sunday with Kepa Arrizabalaga dropping to the bench.

Defence: Chelsea kept a clean sheet during the 1-0 win over Norwich on Tuesday night but they could still shuffle their pack in defence this weekend as Lampard needs to keep his players fresh for two huge league games coming up.

Andreas Christensen is pushing for a recall so Kurt Zouma might be the man to make way with Antonio Rudiger keeping his place in the middle of the back four.

Marcos Alonso can be a liability defensively at times and Man Utd’s attack has been in terrific form lately so Lampard may want to opt for a more defensive option with Cesar Azpilicueta moving to left-back. That would allow Reece James to return at right-back and he’ll have the pace to cope with Marcus Rashford on that flank.

Midfield: The Blues have been dealt a blow after Lampard confirmed at his press conference today that N’Golo Kante has failed to recover from a thigh injury and won’t be available to face Man Utd this weekend.

Billy Gilmour is also still out injured so Jorginho is expected to keep his place in the holding role while Mateo Kovacic should also line-up in the middle of the park for Chelsea at Wembley after returning to full fitness recently.

Lampard will then have to decide between Ross Barkley, Mason Mount and Ruben Loftus-Cheek for the final midfield spot. Loftus-Cheek started against Norwich so I think he’ll drop out with Mount perhaps favourite to be recalled.

Attack: Tammy Abraham is pushing to be recalled up front but Olivier Giroud is the preferred choice for Chelsea right now and grabbed the winner against Norwich on Tuesday so I think the Frenchman might keep his place against Man Utd.

Willian should also once again start on the right-wing while Christian Pulisic could also retain his spot on the left meaning the likes of Callum Hudson-Odoi, Pedro and Michy Batshuayi may have to settle for places among the subs. 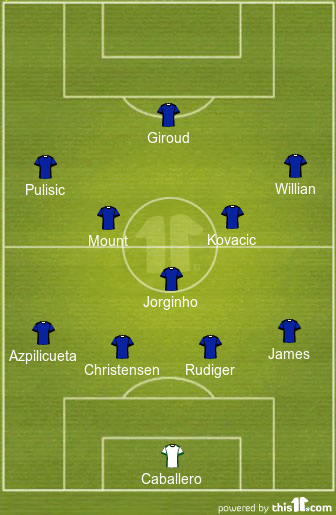