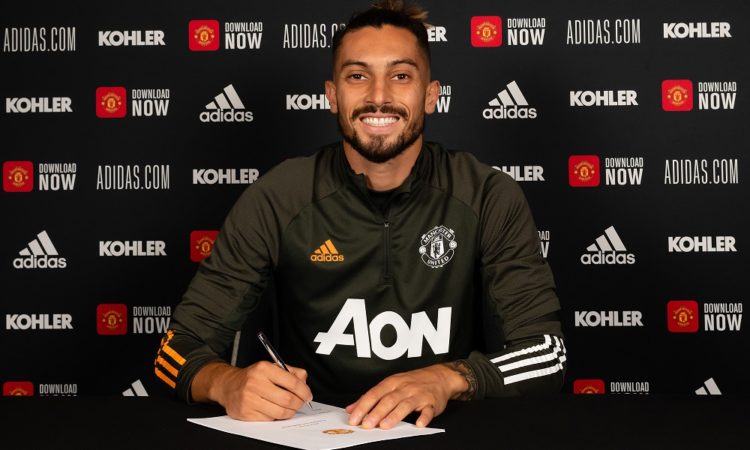 Manchester United have selected their four summer signings after announcing their 25-man squad for the group stages of the Champions League.

Donny van de Beek has made a slow start to life since arriving from Ajax this summer but the Dutch midfielder is unsurprising picked as part of the squad along with the likes of Paul Pogba, Bruno Fernandes and Scott McTominay.

Edinson Cavani sealed a deadline day move to Old Trafford after arriving on a free transfer having left Paris Saint-Germain at the end last season and the prolific hitman has been named in Man Utd’s European squad.

Ole Gunnar Solskjaer splashed out on a new left-back on deadline day too with Alex Telles arriving from Porto and the Brazilian is in the squad along with the likes of Luke Shaw, Aaron Wan-Bisska, Axel Tuanzebe and Tim Fosu-Mensah.

A surprise name to join Manchester United on Monday was Facundo Pellistri and the 18-year-old winger has been thrown straight into Solskjaer’s first team squad after arriving from South American club Penarol. The youngster is also picked for the European squad.

However, there are some notable absentees as Sergio Romero – who featured prominently in United’s European campaign last season – is left out along with Phil Jones and Marcos Rojo meaning they won’t be eligible for the group stages of the Champions League.

Manchester United agreed a deal to sign Amad Diallo on deadline day but the young winger will stay at Atalanta for the next few months before moving to Old Trafford in January so he isn’t included in the 25-man squad.

Homegrown players such as Mason Greenwood, Teden Mengi and Brandon Williams are on the B list so they’ll be eligible for the upcoming group stages games against Paris Saint-Germain, RB Leipzig and Istanbul Basaksehir.

This is the 25-man A list squad, as confirmed on ManUtd.com: