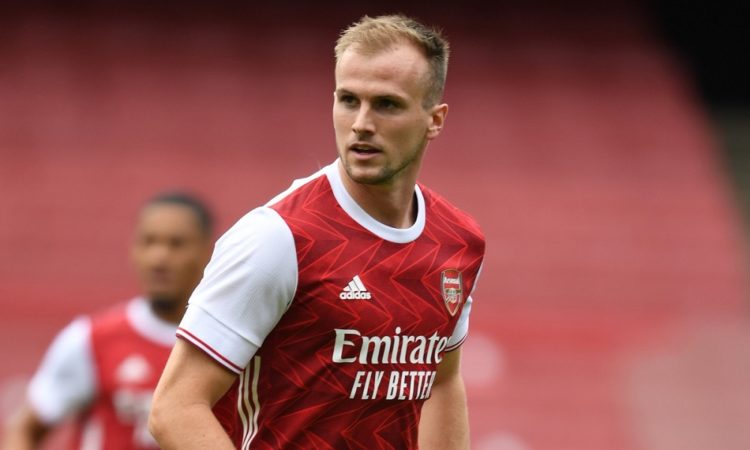 Arsenal have been dealt a fresh blow with the news that Rob Holding is facing up to a month on the sidelines with a hamstring injury, according to the Daily Mail.

Holding was in-line to start in defence for Arsenal during their Premier League clash with Manchester City on Saturday evening but the centre-back pulled-up during the pre-match warm-up routine prior to kick-off.

The 25-year-old complained of tightness in his hamstring and had to be replaced by David Luiz in the starting eleven ahead of Arsenal’s narrow 1-0 defeat to Pep Guardiola’s side at the Etihad Stadium.

Holding underwent a scan on Monday to discover the extent of the hamstring problem and the Daily Mail claims results show the defender is now facing three to four weeks on the treatment table.

It means Holding could be ruled out of Arsenal’s next six games in all competitions starting with Thursday night’s Europa League group stage opener away to Rapid Vienna in Austria.

The news will come as a blow to Mikel Arteta as Holding has been one of his key players during the opening stages of the 2020/21 campaign having started in 7 of Arsenal’s 8 games so far this season.

Holding was close to leaving the Emirates Stadium during the summer transfer window but managed to convince Arteta he still has a future at Arsenal and cemented himself as a regular under the Spaniard.

The Gunners boss will hope Holding makes a swift recovery as he’s already without Pablo Mari and Calum Chambers due to injury while Shkodran Mustafi has only recently returned to training following a thigh injury.

It means Arsenal have limited options at centre-back and Arteta may be forced to bring Sokratis back into the first team set-up after freezing the Greek international out of his plans over the past six months.