Liverpool begin their Champions League group stage campaign when they take on Ajax in Amsterdam this evening.

The Reds head into the game looking to get back to winning ways following two hugely disappointing results that saw them take just one point from their last two Premier League games against Aston Villa and Everton.

Jurgen Klopp’s side were humiliated at Villa Park earlier this month after losing 7-2 to Villa and had to settle for a point against Everton following a controversial Merseyside derby at the weekend.

The Toffees came from behind twice to snatch a point after Virgil van Dijk went off with a season-ending injury, Richarlison saw red for a lunge on Thiago while Jordan Henderson’s last gasp winner was ruled out for a fractional offside.

Liverpool will hope to put those frustrations behind them and get off to a winning start in Champions League Group D when they take on Ajax at the Johan Cruyff Arena this evening.

As previously mentioned, van Dijk won’t feature tonight and may not play again this season after suffering a serious knee injury against Everton while Joel Matip hasn’t travelled to Holland after picking up a knock at the weekend.

Therefore, Fabinho is expected to drop into the back four to start alongside Joe Gomez this evening while Naby Keita could return in midfield after returning to training following a positive Covid test.

Thiago Alcantara hasn’t made the trip to Amsterdam after suffering a knee problem following Richarlison’s challenge on Saturday while Alisson Becker and Alex Oxlade-Chamberlain also remain on the sidelines.

Ajax have no such injury issues as they head into the game with virtually a fully-fit squad to choose from. Quincy Promes and Antony are expected to be recalled after being rested at the weekend. 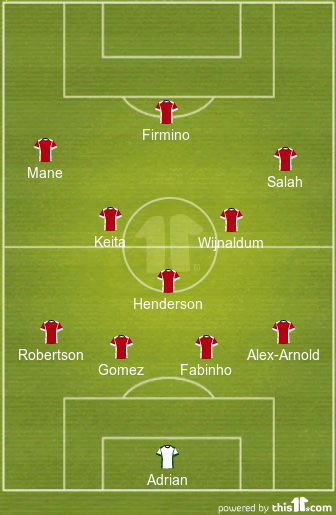 Ajax 1-2 Liverpool: Ajax can be a dangerous side on their day and have plenty of quality so this shouldn’t be an easy game for Liverpool to navigate. The Merseysiders have yet to find their stride this season and are showing real vulnerability at the back – even before van Dijk’s injury – so that will be a concern to Klopp.

However, we shouldn’t forget how formidable Liverpool have been over the past two years and, despite their injury issues, they still have a side packed with top class players so they should still have enough to see off Ajax tonight.

I do expect a closely contested game in Amsterdam but am backing Liverpool to edge it 2-1 to get their group campaign off to a winning start.