Liverpool will take on Sheffield United in their Premier League clash on Saturday night at Anfield.

The Reds are heading into this game on the back of a 1-0 win against Ajax in the Champions League, and they would be looking to keep the winning momentum going. Here is the team we expect Jurgen Klopp to select for the game:

Goalkeeper: Brazilian keeper Alisson Becker is edging closer to fitness but this game may come too soon, which means Adrian will continue between the sticks. Despite having a bedraggled defence ahead of him, and being under the spotlight of criticism in recent weeks, the former West Ham goalkeeper should feel confident after keeping a clean sheet in the last match.

Defence: As Jurgen Klopp prepares to replace the irreplaceable Virgil van Dijk, the real challenge for the rest will be to keep their composure at the back. Fabinho was outstanding against Ajax, and he is likely to continue playing at centre-back alongside Joe Gomez, although Joel Matip could make a surprise return if he passes a late fitness test.

Klopp revealed in the press conference that summer signing Kostas Tsimikas is still short of match fitness. Thus, Andy Robertson is set to continue in the left-back role while Trent Alexander-Arnold will retain his place on the right.

Midfield: Alex Oxlade-Chamberlain is still out injured, but the Reds boss has plenty of options in the middle of the park. Skipper Jordan Henderson is set to return along with Naby Keita so James Milner and Curtis Jones will make way. Klopp was coy when asked about whether Thiago could start, but he didn’t rule him out either.

Klopp on whether Thiago/Matip will be involved tomorrow: "I don't know. Training is after the press conference. We will see who is out there." Cards close to his chest.

In all probability, Gini Wijnaldum is likely to retain his place in the side, but Klopp could be tempted to use the Spaniard if he’s fit enough.

Forward: Despite the impressive cameo performances of Diogo Jota and Takumi Minamino in midweek, they will have to settle for a role on the bench, with the trio of Sadio Mane, Mohamed Salah and Roberto Firmino all set to continue.

Popular football pundit Tony Cascarino has recently shared his concern about Firmino’s lack of goals, but the Liverpool boss doesn’t see it as an issue at all. The Brazilian brings a lot more to the table with his creativity, and dropping him is simply out of the question. 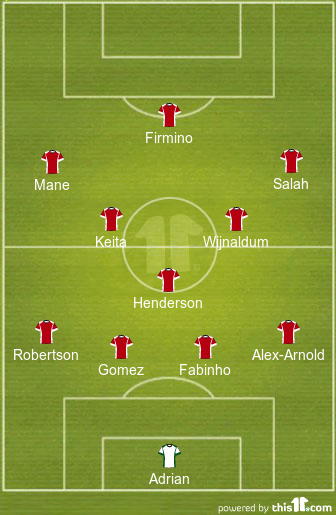