Chelsea are in Russia to take on Krasnodar in the Champions League on Wednesday evening. Here is the team we expect Frank Lampard to select for the game:

Goalkeeper: Edouard Mendy is fully fit again and has come through the last two games unscathed so he should keep his place in goal with Willy Caballero on the bench as Kepa Arrizabalaga remains injured.

Defence: Lampard went with a back three/five against Manchester United at the weekend but the Blues boss could revert to a back four against Krasnodar in the Champions League tomorrow night.

Thiago Silva has been ruled out after not making the trip to Russia as Lampard wants to carefully manage the Brazilian’s game-time. Antonio Rudiger is back in the squad but Andreas Christensen is likely to be the man recalled to line-up alongside Kurt Zouma.

Cesar Azpilicueta may be the casualty if Chelsea do play a back four as Reece James could start ahead of him at right-back with Ben Chilwell expected to keep his place at left-back as Marcos Alonso is suspended.

Midfield: Chelsea could freshen things up in midfield with Jorginho given a rest as the Italian has played a lot of football this season. Mateo Kovacic could therefore be recalled to start alongside N’Golo Kante in the middle of the park.

Kai Havertz has also played plenty of minutes recently so he could be rested for this game with Mason Mount recalled to start in the advanced attacking midfield role.

Attack: Chelsea have been held to two consecutive 0-0 draws so Lampard is expected to freshen things up in attack with Timo Werner given a rest. Olivier Giroud is pushing for a recall but Tammy Abraham is likely to be the man brought in up front.

Hakim Ziyech is in-line to make his first start after building-up his fitness with some substitute appearances in recent weeks while Christian Pulisic could keep his place on the left wing.

That means Callum Hudson-Odoi may have to make-do with a place among the substitutes tomorrow night but he’ll be a good option for Lampard to have in the second half if required. 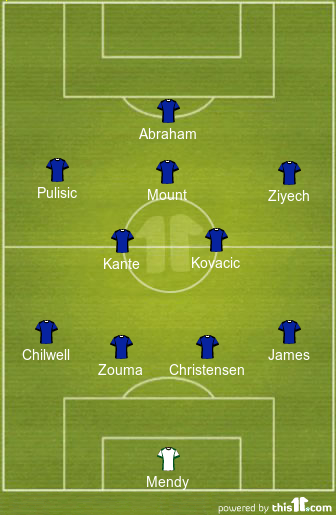