Chelsea take on Burnley at Turf Moor on Saturday afternoon. Here is the team we expect Frank Lampard to select for the game:

Goalkeeper: Edouard Mendy is fully fit and playing well so he is certain to keep his place between the sticks this weekend. Kepa is an injury doubt so Willy Caballero should once again be on the bench.

Defence: Chelsea are expected to stick with a back four and Thiago Silva is set for a recall after not being risked for Wednesday night’s Champions League group stage win over Krasnodar.

Antonio Rudiger was recalled for that match in midweek but the German is set to drop out with Kurt Zouma keeping his place in defence while Ben Chilwell should once again start at left-back.

Cesar Azpilicueta didn’t put a foot wrong against Krasnodar on Wednesday but Lampard may want to freshen things up so Reece James could be set for a recall at right-back this weekend.

Midfield: Chelsea have no fresh injury worries but N’Golo Kante should be set for a recall after being rested for the Champions League win. Jorginho seems to have cemented himself as a regular under Lampard so Mateo Kovacic is the man who could make way for Kante.

Attack: Kai Havertz should once again line-up in the attacking midfield role while Mason Mount is pushing for a recall. Hakim Ziyech got himself on the scoresheet in midweek but Lampard is still being careful with his game-time following injury so Mount may come in for the Moroccan against Burnley.

Chelsea have plenty of options through the middle but Timo Werner should once again lead the line up front with Tammy Abraham and Olivier Giroud offering support from the substitutes bench.

Callum Hudson-Odoi was among the goals in Russia last time out but he may still find himself back on the bench with Christian Pulisic recalled on the left wing after scoring a late goal in midweek. 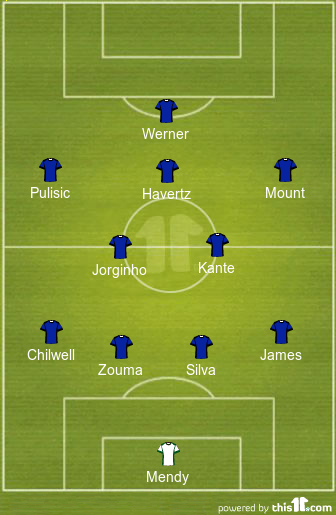