Manchester United take on Istanbul Basaksehir in the Champions League on Wednesday evening. Here is the line-up we think Ole Gunnar Solskjaer will select for the game:

Goalkeeper: David De Gea has started in both of United’s Champions League games so far this season so we expect Solskjaer to select his number one tomorrow meaning Dean Henderson will remain on the bench.

Defence: Man Utd have played with a back four in recent weeks and Solskjaer is likely to stick with that system against Basaksehir. Harry Maguire could keep his place but we might see Axel Tuanzebe coming in for Victor Lindelof after impressing against PSG recently.

Aaron Wan-Bissaka will continue at right-back while Luke Shaw should keep his place once again as Axel Telles hasn’t made the trip to Turkey as he continues to miss out having tested positive for COVID-19.

Eric Bailly is still working his way back to fitness from a knee injury while Phil Jones isn’t due to return until December.

Midfield: Manchester United have gone with a diamond midfield with mixed results over the past two games. It worked well against Leipzig but Arsenal dominated the middle of the park on Sunday so we may see Solskjaer mixing it up tomorrow.

Paul Pogba could make way after a disappointing performance against the Gunners that saw him give away the decisive penalty so Nemanja Matic could be set for a recall alongside Fred.

Scott McTominay may drop out while Bruno Fernandes should be given a rest with Donny van de Beek given another chance to impress in the advanced attacking midfield role.

Attack: Anthony Martial is back in contention after completing his three-match suspension at the weekend and the French international is expected to be given an immediate recall to start up front.

Marcus Rashford may keep his place on the left side of attack while Mason Greenwood could start on the opposite flank – although Daniel James is pushing for a recall.

Edinson Cavani is another option for Man Utd up front but the Uruguayan hitman is expected to remain among the substitutes along with the likes of Juan Mata and Odion Ighalo. 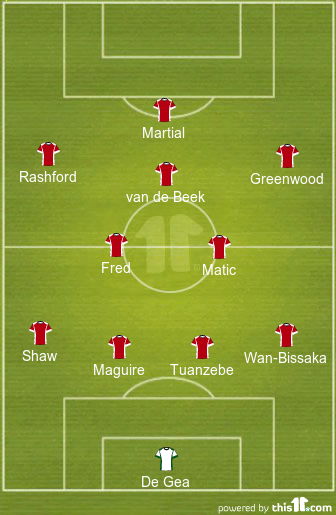