Manchester United will look to get back to winning ways when they take on Everton at Goodison Park on Saturday. Here is the line-up we think Ole Gunnar Solskjaer will select for the game:

Goalkeeper: Dean Henderson was handed his Champions League debut during the shock defeat to Basaksehir on Wednesday night but David De Gea is expected to be recalled to face Everton this weekend.

Defence: Man Utd have gone with a back four in recent weeks and Solskjaer is likely to stick with that formation at Goodison Park despite the poor defending on show against Basaksehir last time out.

Harry Maguire should keep his place in the middle of the defence and the England international is expected to be partnered by Victor Lindelof as he’ll be recalled after not being risked in the Champions League due to a minor knock. Axel Tuanzebe is the man likely to make way.

Aaron Wan-Bissaka will once again start at right-back and Luke Shaw should continue on the left as Alex Telles is still unavailable having missed the last few games following his positive test for COVID-19.

Midfield: Manchester United ditched the diamond midfield against Basaksehir and despite losing in Turkey, I still think Solskjaer will go with something like a 4-2-3-1 against Everton on Saturday.

Fred is expected to be recalled along with Scott McTominay so Donny van de Beek will drop to the bench while Nemanja Matic is set to be dropped after a poor display last time out.

Paul Pogba is unlikely to start against Everton as he’s struggled for form this season and Bruno Fernandes will occupy the attacking central midfield position for United at Goodison Park.

Attack: Anthony Martial is back in contention after completing his three-match domestic suspension and he should keep his place up front despite a disappointing display against Basaksehir.

Marcus Rashford is also likely to retain his place in the Man Utd attack while Mason Greenwood could be recalled to start on the right with the 19-year-old selected ahead of Juan Mata and Daniel James – who’ll have to settle for a place on the bench.

Edinson Cavani is pushing to make his full debut up front but I think the Uruguayan hitman will remain among the substitutes against the Toffees on Saturday lunchtime. 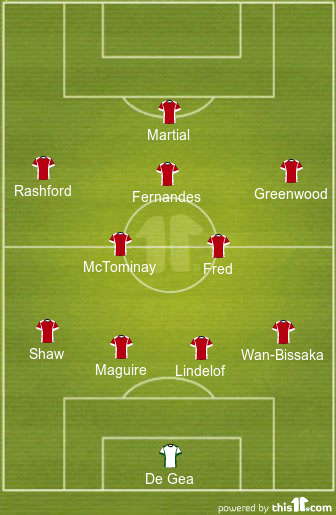