Liverpool will face Manchester City in the Premier League clash on Sunday at the Etihad Stadium in arguably one of the most anticipated matches of the season [Kick-off 16:30].

The last time Liverpool visited Etihad, Manchester City thrashed them 4-0, but it didn’t have any impact as the title was already won by that point. This time, the two in-form teams are going head to head early in the season but the outcome could still have a big impact in the title race.

Despite the early good performances of Tottenham, Chelsea and Everton, it’s Manchester City whom Liverpool see as their biggest threat for the title once again. Here is the team we expect Klopp to select for the game:

Goalkeeper: This is a pretty straightforward choice. Big games need the best players and Alisson is one of the best in the world.

Defence: Klopp has confirmed today that Fabinho is recovering well but he won’t be ready for the titanic clash this weekend. Nathaniel Phillips and Rhys Williams did exceptionally well against West Ham and Atalanta respectively, but Klopp is likely to use Joel Matip who has recovered fully from injury. Matip is all set to partner Joe Gomez at the back.

Kostas Tsimikas is back from injury but Andrew Robertson should continue at left-back while Trent Alexander-Arnold will occupy the right-back position once again.

Midfield: While there could be a temptation to use 4-2-3-1 using all four attacking players like the one they used against Sheffield United, Klopp will probably go with a three-man midfield against City.

With Fabinho out and Thiago Alcantara still not ready to return from his knee injury Jordan Henderson should start in the deeper position. Naby Keita is fit again so he could get the nod to start along with Gini Wijnaldum in midfield meaning Curtis Jones misses out.

Forward: Klopp has a big selection dilemma up front – whether to start with Diogo Jota or Roberto Firmino? Ideally, a manager should go with players who are in form, and on that merit, Jota – who scored 7 goals in his last 10 games including a hat-trick in the last match – should start.

However, Firmino is pivotal to how Liverpool play and he is most effective against big teams where the Brazilian can influence the game with his creativity and industry. Therefore, Klopp will probably start with Firmino and use Jota later on depending on the situation.

Obviously Mohamed Salah will keep his place in the Liverpool attack while Sadio Mane should make-up the front three at the Etihad. 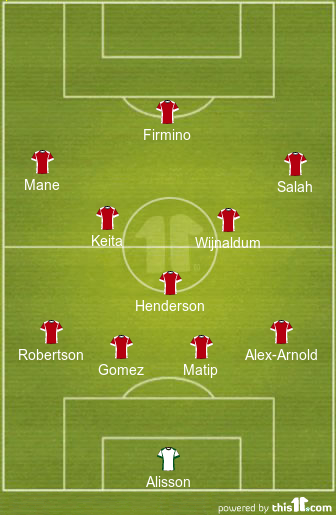