Arsenal get back to league action when they take on Aston Villa at the Emirates on Sunday evening. Here is the team Gooner Mac expects Mikel Arteta to select:

Goalkeeper: Bernd Leno was a surprise starter for the Europa League win over Molde on Thursday night. Alex Runarsson was expected to start in midweek but he’ll have to settle for a place on the bench again with Leno keeping his place tomorrow.

Defence: Arsenal should make plenty of changes in defence with Gabriel set for a recall after being rested last time out while Rob Holding should also come back into the side following his impressive display last weekend.

Kieran Tierney should also get a recall on the left side of the back three so Sead Kolasinac and Shkodran Mustafi will drop out while David Luiz may also find himself on the bench if Arteta sticks with Holding.

Midfield: In midfield we should also see Thomas Partey recalled after he was rested against Molde. The Ghanaian international was excellent during Arsenal’s win over Man Utd last week so Arteta will be looking for another commanding performance from him tomorrow.

It will be interesting to see who partners Partey as Granit Xhaka will hope to keep his place but it will be difficult for Arteta to leave Mohamed Elneny out of the side after his excellent performance at Old Trafford.

We should see Hector Bellerin recalled on the right flank with Cedric Soares making way while Bukayo Saka should come in for Ainsley Maitland-Niles on the left after the 19-year-old was rested on Thursday.

Dani Ceballos is expected to drop to the bench while Joe Willock will feel unfortunate to miss out after another terrific performance against Molde in midweek.

Attack: Arsenal will recall their captain in attack as Pierre-Emerick Aubameyang was rested for the Europa League win while Alexandre Lacazette could also come in for Eddie Nketiah up front.

Nicolas Pepe scored against Molde and will be hoping to keep his place but I think we’ll see Willian starting on the right side of attack tomorrow. Reiss Nelson is a doubt with a knock which kept him out in midweek. 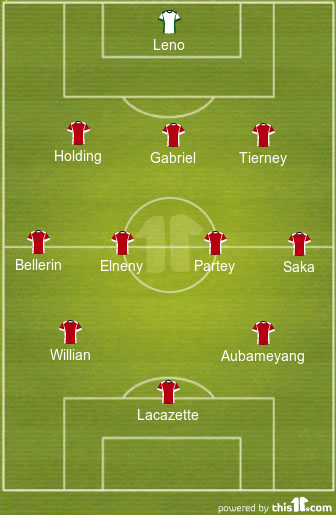