Tottenham will take on Manchester City at the Tottenham Hotspur Stadium on Saturday in the Premier League [Kick-off: 17:30pm].

The north London outfit are second in the Premier League table – five points ahead of Pep Guardiola’s side who have played a game less. Jose Mourinho has lost 10 times to teams managed by Guardiola, more than he has against any other manager, but a victory here for Spurs will give them a massive lift in the title race.

Mourinho has confirmed that Harry Winks picked up an injury during the international break, while Erik Lamela is in the last phase of his recovery. Apart from that, Spurs have no major injury issues, and this is the team we expect the Portuguese boss to select for the game:

Goalkeeper: Hugo Lloris, the club’s first-choice keeper, has played in all the Premier League games so far and the Frenchman is expected to continue between the sticks and take the captain’s armband once again.

Defence: Matt Doherty tested positive for COVID-19 earlier this week and he is unlikely to take part. Mourinho has options in Serge Aurier and Japhet Tanganga, with the 27-year-old Ivorian likely to start at right-back.

Davinson Sanchez could be rested following his long-flight return after Colombia’s 6-1 defeat against Ecuador. Eric Dier is likely to partner Toby Alderweireld at the back for Tottenham, while Sergio Reguilon will take up the customary left-back role ahead of Ben Davies.

Midfield: With Winks being ruled out, Mourinho is likely to start with Pierre-Emile Hojbjerg and Moussa Sissoko in the middle of the park. Tanguy Ndombele picked up a knock in the last game but after a proper few weeks of rest, he should be fit to play.

Forward: Tottenham organised a private jet for Son Heung-Min to return to the club early and Mourinho has confirmed that he has tested negative for COVID-19 so will start against City.

Gareth Bale – who looked in excellent shape for Wales during the international break – should retain his place in attack while Harry Kane is expected to lead the line up front once again. 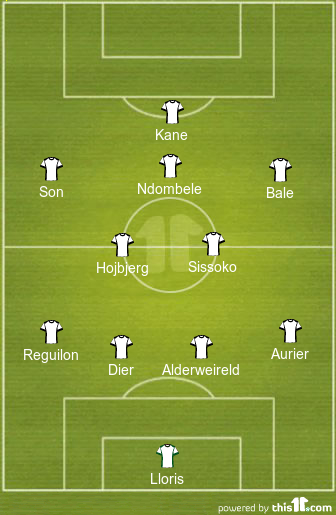