Arsenal get back to Premier League action when they take on Leeds United at Elland Road this afternoon.

The Gunners have had two weeks to digest their shocking 3-0 defeat to Aston Villa at the Emirates Stadium before the international break and Mikel Arteta insists his players need to respond with a positive result today.

It’s been a frustrating opening to the new season for Arsenal as they’ve won four and lost four of their eight Premier League games so they need to get things back on track in order to climb up the table.

The north Londoners head into the game sitting in the bottom half of the Premier League but could move level on points with sixth-placed Aston Villa with a win at Elland Road this afternoon.

Leeds United are also in desperate need of a win as they currently lay down in 15th position following consecutive 4-1 defeats to Leicester City and Crystal Palace so Marcelo Bielsa will be demanding a result today.

Arsenal have been dealt a major blow with the news that Thomas Partey has been ruled out with a thigh injury that he sustained against Aston Villa two weeks ago so Granit Xhaka should be recalled in midfield.

Mohamed Elneny and Sead Kolasinac are also out of the game after testing positive for covid-19 while away on international duty but Pablo Mari is back in full training after recovering from an ankle injury – although this game is likely to come too soon for the defender.

Gabriel Martinelli is also out as he’s still overcoming a knee injury but Dani Ceballos, Nicolas Pepe and Eddie Nketiah are pushing for recalls.

Leeds have been handed a major boost after Kalvin Phillips was passed fit to return from a shoulder injury while Rodrigo is also back in contention.

However, Gaetano Berardi, Adam Forshaw and Diego Llorente are all missing and Pablo Hernandez has been ruled out with a muscle strain. 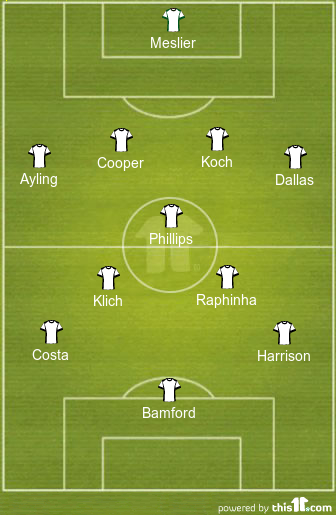 Leeds Utd 1-2 Arsenal: The Gunners have struggled for fluency going forward at times this season but Leeds have one of the worst defensive records in the division so Arsenal should be confident of causing a few problems this afternoon.

Leeds were also poor during their defeats to Leicester and Palace so we think Arsenal are going to have enough quality to edge this one. A narrow win but a welcome three points for the Londoners.