Liverpool get back to Champions League action when they welcome Atalanta to Anfield on Wednesday night. Here is the team we expect Klopp to select for the game:

Goalkeeper: I don’t think there is any debate over who’ll start in goal as Alisson Becker is certain to retain the gloves once again.

Defence: Liverpool still have plenty of injury concerns in defence as Joe Gomez is facing a lengthy spell on the sidelines with a knee injury while Virgil van Dijk is also still working his way back to fitness following surgery.

Trent Alexander-Arnold is out as the England international is recovering from a calf problem. James Milner filled-in at right-back against Leicester at the weekend but he may be moved into midfield with Neco Williams recalled in defence.

Fabinho may get a rest after being rushed back from injury to start against the Foxes so Rhys Williams could come in alongside Joel Matip after the youngster overcame a knock. Andy Robertson will continue at left-back once again.

Midfield: Jordan Henderson wasn’t able to train with the rest of the squad today so it looks unlikely the Liverpool captain will be involved tomorrow as he’s still working his way back from a thigh problem.

Thiago Alcantara was another absentee this afternoon so a knee injury is set to rule him out of the Atalanta clash while Naby Keita is a doubt after picking up a thigh issue against Leicester on Sunday.

Gini Wijnaldum will keep his place in midfield and he could be joined by Milner if Thiago, Keita and Henderson are all ruled out. Curtis Jones impressed at the weekend and the 19-year-old could keep his place tomorrow night.

Forward: Liverpool have been handed a major boost as Mohamed Salah is set to return after missing the Leicester game having tested positive for Covid-19 during the recent international break. The Egyptian forward has been given the green light to resume full training and should start in the Liverpool attack along with Sadio Mane.

Roberto Firmino missed training today but Liverpool insist it wasn’t due to any injury issue and he’s still in-line to feature against Atalanta so the Brazilian could keep his place up front with Diogo Jota given a rest.

The former Wolves forward has been a huge hit since joining Liverpool so he’ll be a real threat off the bench along with the likes of Takumi Minamino and Divock Origi. 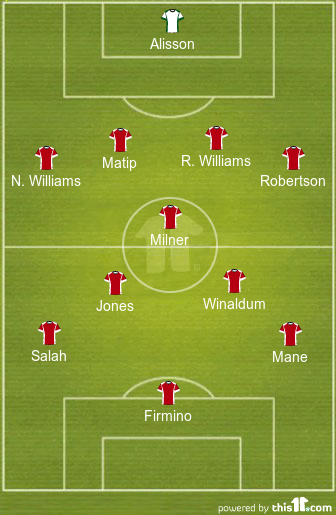