Liverpool will be looking to move clear at the top of the Premier League table with a win over Brighton at the Amex Stadium on Saturday lunchtime. Here is the team we expect Jurgen Klopp to select for the game:

Goalkeeper: Alisson Becker is certain to retain the gloves once again so Adrian will have to settle for a spot on the bench.

Defence: Liverpool will continue to be without Virgil van Dijk and Joe Gomes to long term injuries while Trent Alexander-Arnold is also still working his way back from a calf issue so Klopp will be without three of his key defenders tomorrow.

Fabinho was rested for the Champions League defeat to Atalanta in midweek so he’s set for a recall to start alongside Joel Matip in the middle of the back four. Youngster Rhys Williams will drop to the bench.

Neco Williams will be hoping to keep his place at right-back but I think James Milner will drop into defence while Andrew Robertson will return at left-back after being rested on Wednesday night. Kostas Tsimikas will drop out.

Midfield: Liverpool were handed a boost after Jordan Henderson took part in training today but the midfielder is still a doubt for the trip to Brighton this weekend. Klopp is unlikely to risk his skipper from the start so a place on the bench is probably the best Henderson can hope for.

Thiago Alcantara is unlikely to be passed fit as he continues to work his way back from a knee injury while Naby Keita is another doubt after missing the Atalanta defeat with a thigh injury that he sustained against Leicester last Sunday.

Gini Wijnaldum will keep his place in midfield and he could be joined once again by Curtis Jones as the youngster has impressed in recent games.

Forward: Liverpool may be stretched in defence and midfield but they have plenty of options in attack. Mohamed Salah is expected to keep his place on the right flank while Sadio Mane should once again start on the left.

Roberto Firmino should be recalled to start up front after being named on the bench in midweek while Diogo Jota is also expected to come back into the Liverpool side to face Brighton tomorrow afternoon.

Xherdan Shaqiri is set to miss out through injury but Divock Origi and Takumi Minamino will be attacking options from the bench for Klopp. 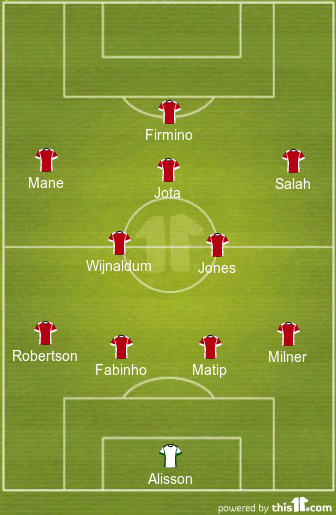