Tottenham will take on LASK in the Europa League group stages this evening. This is the team we expect Jose Mourinho to select for the game:

Goalkeeper: Hugo Lloris will be given a rest so Joe Hart is expected to get another run out between the sticks.

Defence: Tottenham will be without Toby Alderweireld as the centre-back is still recovering from a groin injury while Joe Rondon may be given a breather so Japhet Tanganga should start alongside Davinson Sanchez in the middle of the back four.

Sergio Reguilon has been ruled out of the trip to Bulgaria due to a knock so Ben Davies will be recalled at left-back and Matt Doherty is expected to come-in for Serge Aurier on the opposite side of defence tonight.

Midfield: Pierre-Emile Hojbjerg will be given a rest so Harry Winks will be recalled in midfield and he may start alongside Moussa Sissoko with the Frenchman the only player keeping his place from the side that drew with Chelsea last time out.

Tanguy Ndombele should be rested this evening so Giovani Lo Celso is expected to be recalled for Tottenham’s Europa League clash against LASK.

Forward: Spurs have a huge North London derby against Arsenal to worry about on Sunday so Mourinho will rest his big guns meaning Hueng-min Son is highly unlikely to start this evening.

Harry Kane has been ruled out with a knock but should be fit to face Arsenal on Sunday while Carlos Vinicius is also set to miss the LASK game after suffering a minor issue against Chelsea at the weekend.

It leaves Mourinho short of options up front so Lucas Moura may be asked to play through the middle with Dele Alli coming in for Son on the left side of the Tottenham attack. Gareth Bale is also expected to be handed a recall with the Welshman replacing Steven Bergwijn. 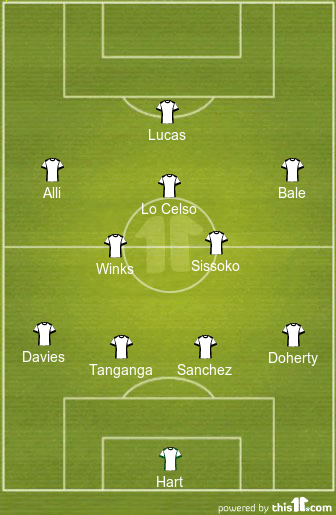