Chelsea take on Leeds United at Stamford Bridge on Saturday night. Here is the team we expect Frank Lampard to select for the game:

Goalkeeper: Edouard Mendy is set to keep his place between the sticks with Kepa having to settle for a place on the bench once again.

Defence: Chelsea are expected to make wholesale changes in defence with Lampard recalling his key players following the win over Sevilla in the Champions League group stages on Wednesday night.

Reece James should replace Cesar Azpilicueta at right-back while Ben Chilwell will come in for Emerson at left-back after the full-backs were both rested in midweek. Thiago Silva and Kurt Zouma also had a breather against Sevilla and should be recalled tomorrow night with Antonio Rudiger and Andreas Christensen making way.

Midfield: Lampard is also expected to make a couple of changes in midfield as N’Golo Kante will be recalled in place of Jorginho while Mason Mount is also pushing for a recall after being rested for Chelsea’s win in the Champions League.

Mateo Kovacic will feel unfortunate to miss out but he may find himself back on the bench with Kai Havertz keeping his place in the Chelsea line-up. The 21-year-old German could start alongside Kante and Mount in the midfield three.

Billy Gilmour made his long-awaited return from injury with a cameo appearance in the second half against Sevilla but a place on the bench is the best he can hope for this weekend.

Attack: Lampard is going to find it extremely difficult to drop Olivier Giroud after the Frenchman scored four times in the Champions League victory so he deserves to keep his place up front tomorrow with Tammy Abraham on the bench.

Timo Werner should be recalled to start on the left side of the Chelsea attack meaning Christian Pulisic will drop out while Hakim Ziyech is expected to come in for Callum Hudson-Odoi on the right. 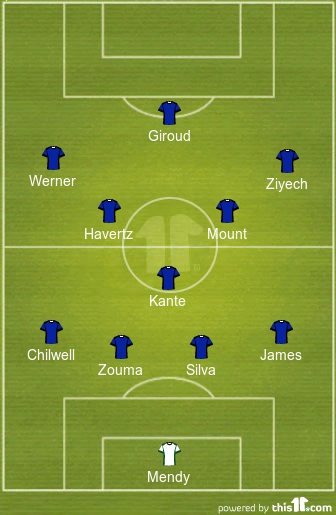