Liverpool take on Wolves at Anfield on Sunday night. Here is the team we expect Jurgen Klopp to select for the game:

Goalkeeper: The Reds are set to be without Alisson Becker as he’s not recovered from a thigh injury that kept him out of the win over Ajax in midweek so Caoimhin Kelleher is expected to keep his place between the sticks.

Defence: Liverpool have been handed a boost as Trent Alexander-Arnold is set to return to the squad after recovering from a calf injury that’s kept him out for the last month. The England international is being tipped to replace Neco Williams at right-back tomorrow.

Andrew Robertson is also expected to shake-off a minor knock that he picked up against Ajax to start at left-back once again while Fabinho should continue alongside Joel Matip in the middle of the back four in the continued absence of Virgil van Dijk and Joe Gomez.

Midfield: Liverpool will check on Jordan Henderson due to a niggling back problem but the skipper is expected to be passed fit to start in midfield and he could be partnered by Gini Wijnaldum once again.

If Klopp opts for a more attacking formation at Anfield, Curtis Jones may drop out despite scoring the winner in midweek. The youngster has settled into life in the first team extremely well but he’s played a lot of football lately so may need a rest.

Naby Keita will need a late fitness test to see if he’ll return to the squad after recovering from a muscle problem but he may have to settle for a place among the substitutes tomorrow night.

Thiago Alcantara is still unavailable due to an on-going knee injury, James Milner is also out with a hamstring issue while Alex Oxlade-Chamberlain isn’t ready to return from a long-term knee injury.

Forward: Liverpool have no fresh injury concerns in attack following the Ajax win and Klopp may decide to recall Roberto Firminio to start up front alongside Mohamed Salah and Sadio Mane.

Diogo Joto could also keep his place following a superb run of form so the likes of Takumi Minamino and Divock Origi are expected to remain on the bench against Wolves. 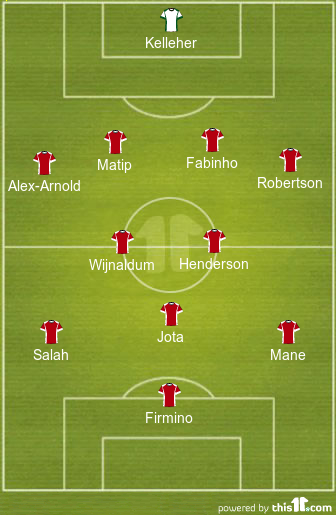