Manchester United will look to get over their Champions League disappointment when they take on Manchester City on Saturday. Here is the line-up we think Ole Gunnar Solskjaer will select for the game:

Goalkeeper: David De Gea came under fierce criticism for his part in RB Leipzig’s crucial third goal on Tuesday night but we still think Solskjaer will stick with the Spaniard so Dean Henderson will have to make-do with a place on the bench.

Defence: Man Utd played a back three in Germany but it didn’t work so Solskjaer might be tempted to revert to a back four against Man City this weekend. If he does, then we might see Alex Telles drop out after a poor display against Leipzig with Luke Shaw preferred at left-back after making a successful return from injury.

Victor Lindelof is likely to keep his place in defence while Harry Maguire is highly unlikely to be dropped despite his error leading to the third Leipzig goal. Aaron Wan-Bissaka will once again start at right-back.

Midfield: United may go with a diamond in the middle of the park to help combat against the a dangerous City midfield and Fred should be recalled after missing the Champions League game through suspension.

Scott McTominay may drop out after a poor showing in Germany but, despite question marks regarding his future, Paul Pogba could be recalled to the starting eleven after making another positive impact off the bench last time out.

Nemanja Matic could start in the holding role to protect the back four but there is little doubt Bruno Fernandes will once again start in the attacking midfield role after another impressive performance on Tuesday night. Man Utd have become heavily reliant on Fernandes so he’ll line-up against City with Donny van de Beek likely to be named on the bench.

Attack: Manchester United will assess Anthony Martial after he missed the trip to Leipzig with a minor groin issue but the Frenchman is expected to be passed fit to return this weekend which will be a big boost.

Martial could start up front as Edinson Cavani is a doubt to face City after missing the game on Tuesday with a knock but Marcus Rashford should keep his place meaning Mason Greenwood may have to drop to the bench alongside Juan Mata and Daniel James. 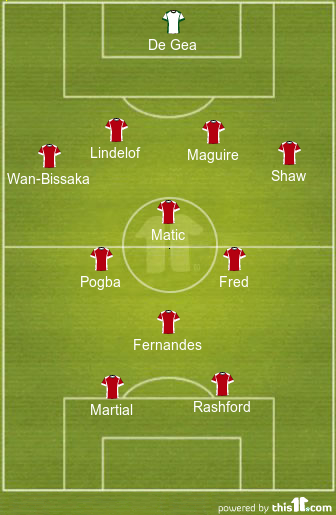