Liverpool take on Fulham at Craven Cottage on Sunday afternoon. Here is the team we expect Jurgen Klopp to select for the game:

Goalkeeper: The Reds have been handed a major boost as Alisson Becker has returned to full training and will be in contention to start on Sunday as long as he doesn’t suffer any reaction. Caoimhin Kelleher has deputised for the last few games but will drop back to the bench this weekend.

Defence: Trent Alexander-Arnold returned to the starting eleven for Wednesday night’s draw with Midtjylland after recovering from injury so he should keep his place at right-back while Andrew Robertson is set for a recall at left-back after being rested in midweek. Kostas Tsimikas is a doubt after picking up a knock in Denmark.

Fabinho is expected to start once again in the Liverpool defence in the continued absence of Virgil van Dijk and Joe Gomez. Joel Matip should get a recall after being rested in midweek so Rhys Williams will drop out.

Midfield: Liverpool could have Alex Oxlade-Chamberlain back in the squad for the first time this season after he returned to full training following a knee injury but a place on the bench is probably the best he can hope for against Fulham.

Jordan Henderson will be recalled along with Gini Wijnaldum after they were rested on Wednesday night so Naby Keita will drop to the bench while youngster Leighton Clarkson will make way after making his full debut.

Curtis Jones is also set to come back into the Liverpool midfield after being given a well-earned breather last time out but James Milner, Thiago Alcantara and Xherdan Shaqiri remain on the sidelines through injury.

Forward: Mohamed Salah was a surprise starter against Midtjylland but he should keep his place in attack this weekend while Sadio Mane is set for a recall after being a substitute in midweek.

Roberto Firmino should come in to lead the line up front for the Reds as Diogo Jota is a major doubt after picking up a knock during the Champions League draw in Denmark. Takumi Minamino will drop to the bench along with Divock Origi. 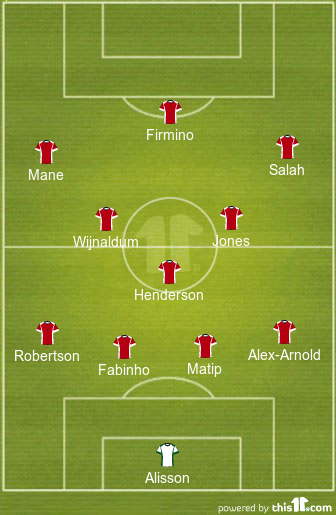