Manchester United will look to get over their Champions League disappointment when they take on Manchester City on Saturday evening [5.30pm kick off].

The Red Devils crashed out of the Champions League following a dramatic 3-2 defeat away to RB Leipzig on Tuesday night which consigned them to the Europa League after finishing third in Group H.

However, United don’t have time to dwell on that disappointment as they have a huge Manchester Derby to look forward to this weekend with both sides in desperate need of a positive result.

Man Utd currently sit sixth in the Premier League table – one point above City – after beating West Ham last weekend so they’ll be looking to close-in on the top four with a win on home soil tomorrow night.

However, City head to Old Trafford knowing they cannot afford another set-back as they already trail the league leaders by six points so Pep Guardiola will be keen to take away a positive result from Man Utd this weekend.

United will welcome Anthony Martial back into the squad after he recovered from a minor muscle injury that kept him out of the trip to Leipzig but Edinson Cavani remains a doubt after also missing the Champions League defeat with a knock.

Luke Shaw made a successful return to the starting eleven in midweek after recovering from a hamstring issue so he’ll hope to keep his place while Fred is back in contention after serving a one-match European ban.

Paul Pogba is pushing for a start after making a positive impact off the bench last time out and David De Gea is expected to keep his place despite coming under fire for his part in the Leipzig winner on Tuesday night.

Manchester City will assess Sergio Aguero after he came off the bench to score during their 3-0 win over Marseille in midweek having recovered from a knee injury but he isn’t expected to start tomorrow.

Ilkay Gundogan is back from an ankle injury but Eric Garcia has been ruled out for a few weeks with a knock. 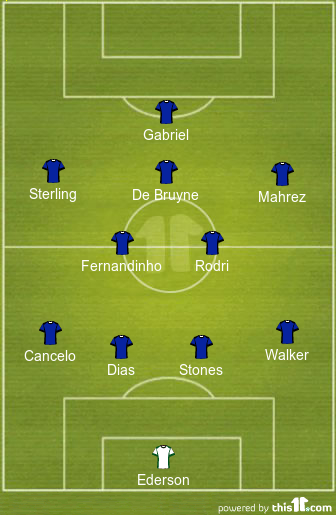 Man Utd 1-1 Man City: Both sides have been inconsistent so far this season so this should be an interesting game tomorrow. United won both league meetings last season but they’ve really struggled at home this campaign having taken just four points from their five league games at Old Trafford so far.

Man City have also won six of their last nine Premier League away trips to Man Utd and Solskjaer’s side will be reeling from their Champions League exit so I think the visitors will get something from this game. I’m going for a cagey 1-1 draw.