Manchester United take on Sheffield United at Bramall Lane on Thursday night. Here is the line-up we think Ole Gunnar Solskjaer will select for the game:

Goalkeeper: The United boss kept faith with David De Gea for the 0-0 draw with Manchester City at the weekend so there is no reason to think the Spaniard won’t keep his place tomorrow night.

Defence: Man Utd are expected to field a back four with Aaron Wan-Bissaka once again at right-back. Eric Bailly and Axel Tuanzebe are options if Solskjaer wants to freshen things up but Victor Lindelof is likely to partner Harry Maguire in the middle of defence once again.

However, we could see a change at left-back as Alex Telles is pushing for a recall. Luke Shaw has only recently returned from injury and has started United’s last two games so Telles may come in against Sheffield United.

Midfield: I wouldn’t be surprised to see Solskjaer switch things up in midfield with Nemanja Matic and Donny van de Beek pushing for recalls after being named on the bench for the Manchester derby on Saturday.

Matic could start in the deepest role with van de Beek ahead of him. The 23-year-old Dutchman could line-up alongside Fred which would mean Paul Pogba is the man to make way as Bruno Fernandes is almost certain to keep his place in the advanced midfield role.

Attack: Manchester United are set to be without Edinson Cavani once again as the South American striker is struggling to prove his fitness after missing the last two games with a knock.

Anthony Martial made his return off the bench against City so the Frenchman should be fit to start up front alongside Marcus Rashford. Mason Greenwood may have to settle for a place on the bench where he’ll be joined by the likes of Juan Mata and Daniel James. 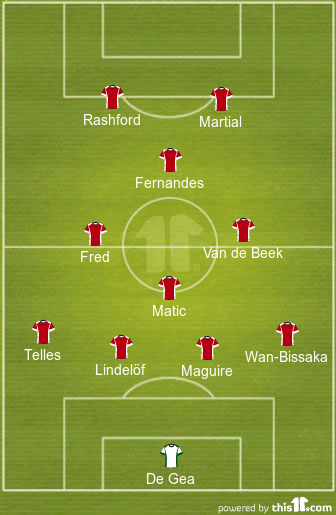