Arsenal take on Man City in the quarter finals of the Carabao Cup this evening. Here is the team Gooner Mac expects Mikel Arteta to select:

Goalkeeper: Arteta is under huge pressure to get a result as Arsenal are on a disastrous run so the Spaniard may pick a stronger side than he would usually have done in the League Cup under different circumstances. Therefore, Bernd Leno may start with Alex Runarsson on the bench.

Defence: Arsenal welcome Gabriel back into the squad after he served a one-game suspension and the Brazilian could be given an immediate recall as he’s been one of Arteta’s best performers this season.

David Luiz should keep his place so Rob Holding may be the man to make way if Gabriel is recalled and Kieran Tierney may start on the left side if Arteta opts to go with a back three.

Midfield: Sead Kolasinac is pushing for a recall and may be brought in to start in the left wing-back position with Bukayo Saka being pushed further forward into a more attacking role.

Hector Bellerin is expected to be recalled to start on the right after being an unused substitute during Arsenal’s defeat at Everton so Ainsley Maitland-Niles could drop back to the bench this evening.

Granit Xhaka will serve the last game of his three-match suspension while Thomas Partey remains out with a thigh problem so Arteta doesn’t have too many options to freshen things up in the middle of the park. Therefore, Mohamed Elneny could continue alongside Dani Ceballos with Joe Willock among the Arsenal subs.

Attack: Pierre-Emerick Aubameyang will miss the game as he’s still suffering from a calf injury so we could see Saka playing on the left forward position. Arteta would ideally want to rest the youngster but he’s been one of the few bright sparks in this Arsenal side recently and the Gunners need a result.

Gabriel Martinelli made his first team return with a cameo off the bench at the weekend but he’s probably not deemed fit enough to start just yet. Willian has been in poor form lately so Nicolas Pepe might keep his place this evening. Reiss Nelson could be back in the squad but may have to settle for a place among the subs.

Eddie Nketiah has started Arsenal’s last two games but I think we might see Alexandre Lacazette recalled to start up front against Man City. Highly rated young striker Folarin Balogun could be named on the bench. 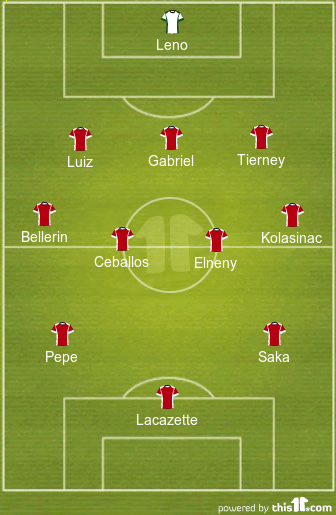