Manchester United take on Watford at Old Trafford in the third round of the FA Cup on Saturday night. Here is the line-up we think Ole Gunnar Solskjaer will select for the game:

Goalkeeper: Dean Henderson started during the Carabao Cup semi-final defeat to Manchester City in midweek and he’s expected to retain the gloves against Watford this weekend. That means David De Gea will remain on the bench.

Defence: Man Utd are expected to make changes in defence with Eric Bailly and Axel Tuanzebe pushing for recalls in the middle of the back four. Victor Lindelof and Harry Maguire are set to be rested.

Alex Telles should be brought back into the side at left-back with Luke Shaw making way but Aaron Wan-Bissaka could keep his place at right-back.

Midfield: Solskjaer is likely to freshen things up in midfield with Nemanja Matic set for a recall. Fred could be given a rest with Scott McTominay keeping his place alongside the Serbian.

Bruno Fernandes is expected to be given a well-earned breather so Donny van de Beek is set for be handed a rare start and the Dutchman will be eager to impress after a difficult start to life at Old Trafford.

Attack: Edinson Cavani remains suspended and Solskjaer is unlikely to risk Marcus Rashford or Anthony Martial so they’re expected to be rested. Odion Ighalo is an option but we could see Mason Greenwood starting up front tomorrow as the teenager has been on the bench in recent games.

Paul Pogba could also be rested with Daniel James and Juan Mata set for recalls while Jesse Lingard is another player who’ll hope to feature having found first team football hard to come by this season. 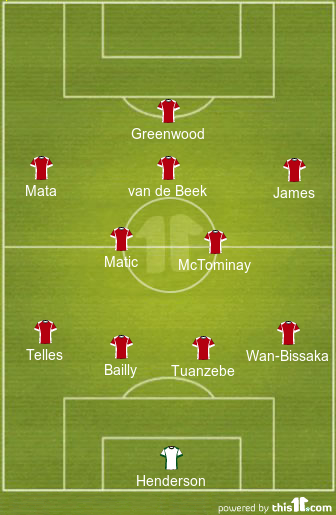