Liverpool take on Manchester United at Old Trafford in the fourth round of the FA Cup on Sunday evening. Here is the team we expect Jurgen Klopp to select for the game:

Goalkeeper: The Reds boss has promised to field a strong side for the game so Alisson Becker is expected to keep his place in goal meaning Caoimhin Kelleher will once again be on the bench.

Defence: Joel Matip made a successful return to action in midweek after recovering from injury so he could keep his place alongside Fabinho in the middle of the Liverpool defence with Joe Gomez and Virgil van Dijk still recovering from serious knee injuries.

Trent Alexander-Arnold is in a bad slump of form right now and Klopp may decide to give him a rest against Man Utd. James Milner could come-in at right-back with Andrew Robertson once again starting at left-back.

Midfield: Liverpool will assess the fitness of Jordan Henderson after he missed the defeat to Burnley in midweek with a muscle injury but Klopp is unlikely to take any risks with his captain so a place on the bench is probably the best he can hope for.

Thiago Alcantara is expected to start against Manchester United while Gini Wijnaldum should also keep his place in the middle of the park. Curtis Jones is pushing for a recall and he could replace Xherdan Shaqiri tomorrow evening.

Forward: Klopp has to find a way to solve Liverpool’s recent goalscoring problems and he’s expected to recall two of his big guns against United. Mohamed Salah and Roberto Firmino both started on the bench against Burnley so they should come back in to the starting eleven this weekend.

Sadio Mane might get a breather so Takumi Minamino is in-line for a recall against Man Utd meaning Alex Oxlade-Chamberlain and Divock Origi will drop to the bench for the Premier League champions. Diogo Jota remains out with a knee injury. 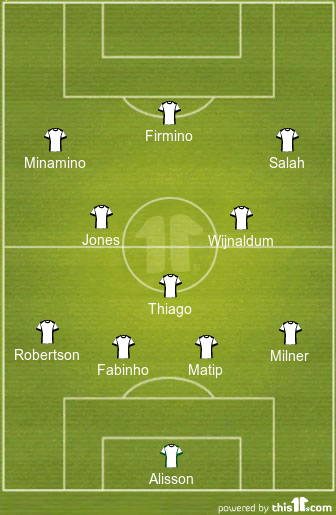