Arsenal take on Manchester United at the Emirates Stadium this evening. Here is the team Gooner Mac expects Mikel Arteta to select:

Goalkeeper: Bernd Leno is certain to keep his place between the sticks so Mat Ryan will once again be his understudy on the bench.

Defence: Arsenal were handed a major boost yesterday as Kieran Tierney was able to take part in full training so it looks like he’ll be available to return against Man Utd having missed the last two matches with a muscle issue.

Cedric Soares is the man most likely to make way despite his impressive display against Southampton as Hector Bellerin should keep his place at right-back. Gabriel is pushing for a recall but I think we’ll see David Luiz keeping his place alongside Rob Holding in the middle of the Arsenal defence.

Midfield: Thomas Partey was also spotted in training on Friday so the Ghanaian international is expected to be passed fit to start after picking up a knock at St Mary’s in midweek. Granit Xhaka is likely to partner Partey as Dani Ceballos is a doubt with a calf issue.

Martin Odegaard has been training with his new Arsenal team mates after joining the club from Real Madrid on Wednesday. However, with only two days to prepare for the visit of Man Utd, a place on the bench is probably the best he can hope for.

Emile Smith Rowe limped off during the 3-1 win at Southampton last time out but the youngster is expected to be available to start against United this evening.

Attack: Arsenal are set to be without Pierre-Emerick Aubameyang as the striker has been tending to his ill mother. Alexandre Lacazette is expected to lead the line up front against Manchester United.

Bukayo Saka continued his superb form with another impressive display against the Saints and he should once again start while Nicolas Pepe may have done enough to keep his place in the side after a positive showing at St Mary’s.

Gabriel Martinelli is another option for Arsenal but I think he’ll have to settle for a place among the substitutes where he’ll be joined by the out-of-form Willian. Eddie Nketiah will also be named on the bench against Man Utd tonight. 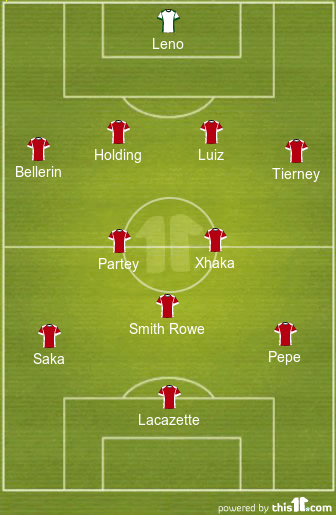