Goalkeeper: Alisson Becker will once again start between the sticks for Liverpool so Caoimhin Kelleher will settle for a place on the bench.

Defence: Joel Matip is set for another spell on the sidelines after limping off with an ankle injury against Tottenham on Thursday night. The news comes as another huge blow to Liverpool as they’re already without Virgil van Dijk and Joe Gomez to serious knee injuries.

To exasperate their problems in defence, stand-in centre-back Fabinho has also been ruled out with a muscle injury that kept him out of the 3-1 win at Spurs so Klopp really is down to the bare bones.

Jordan Henderson is expected to start in the middle of the back four against West Ham with Nat Phillips favourite ahead of Rhys Williams to replace Matip. Thankfully for the Reds they can count on their first choice full-backs with Andy Robertson and Trent Alexander-Arnold expected to start once again.

Midfield: Liverpool continue to be without Naby Keita due to a muscle injury but Thiago Alcantara will keep his place in midfield while Gini Wijnaldum is also expected to start against the Hammers.

James Milner put-in a shift against Tottenham but he may be given a breather with Curtis Jones pushing for a recall. Xherdan Shaqiri and Alex Oxlade-Chamberlain are other options for Klopp but I think they’ll have to settle for places on the bench.

Forward: Roberto Firmino was back on the score-sheet last time out and he should keep his place in the Liverpool attack while Mohamed Salah is also expected to start against West Ham tomorrow.

Sadio Mane was excellent during the win at Spurs so it would be a surprise if he’s given a rest meaning the likes of Takumi Minamino and Divock Origi will be named among the substitutes once again. 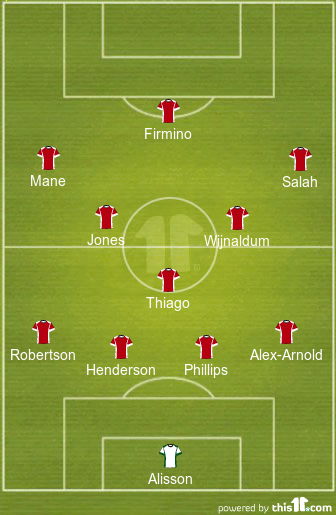