Manchester United take on Southampton at Old Trafford Tuesday evening. Here is the line-up we think Ole Gunnar Solskjaer will select for the game:

Goalkeeper: Number one goalkeeper David De Gea is expected to keep his place between the sticks so Dean Henderson will have to settle for a place on the bench once again.

Defence: Man Utd have been managing the fitness of Victor Lindelof in recent weeks as he continues to nurse an on-going back issue so we could see him given a rest tomorrow night with Eric Bailly recalled to start alongside Harry Maguire.

Luke Shaw has been in terrific form lately but he’s played a lot of minutes so Solskjaer may want to give him a breather with Alex Telles recalled at left-back. Aaron Wan-Bissaka is expected to once again start at right-back for United against Southampton.

Midfield: Scott McTominay was forced off during the 0-0 draw at Arsenal with stomach cramps. It’s nothing serious but Solskjaer has regularly rotated his midfield options throughout the season so McTominay may get a rest tomorrow.

That might allow Paul Pogba to drop into a deeper position alongside Fred after starting out wide at the weekend with Nemanja Matic having to settle for a place among the substitutes.

Bruno Fernandes is expected to keep his place in the attacking midfield role for Manchester United tomorrow night so Donny van de Beek will have to make-do with a place on the bench once again.

Attack: United drew a blank against Arsenal so Solskjaer might look to freshen things up tomorrow with Anthony Martial pushing for a recall. The Frenchman may start out wide with Edinson Cavani retaining his place through the middle despite missing a golden chance at the Emirates on Saturday.

Marcus Rashford should keep his place in the Man Utd attack so the likes of Mason Greenwood, Daniel James and Juan Mata will have to settle for places on the bench against Southampton. 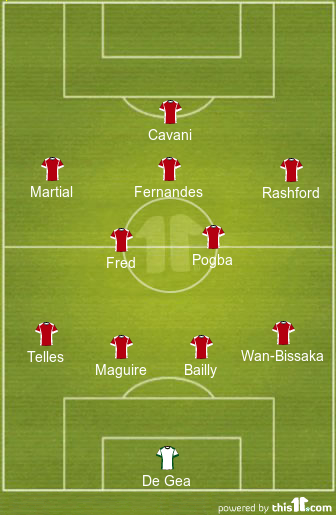