Manchester United take on Everton at Old Trafford on Saturday evening. Here is the line-up we think Ole Gunnar Solskjaer will select for the game:

Goalkeeper: I don’t think there will be any change in goal as David De Gea is expected to keep the gloves once again this weekend so Dean Henderson will have to settle for a place on the bench.

Defence: Man Utd will assess the fitness of Eric Bailly as he’s emerged as a doubt with an unspecified issue so Victor Lindelof is expected to once again continue alongside Harry Maguire in the middle of defence.

Alex Telles is pushing for a recall after struggling to hold down a starting spot this season but Luke Shaw is likely to keep his place as he’s been in superb form recently while Aaron Wan-Bissaka is expected to start at right-back once again.

Midfield: Manchester United thrashed Southampton 9-0 in midweek so Solskjaer may be reluctant to change things too much but we should see one switch in midfield with Paul Pogba expected to be recalled. Fred is likely to keep his place alongside the Frenchman so Scott McTominay may be the man to drop to the bench against Everton tomorrow night.

Donny van de Beek has found regular football hard to come by this season and the Dutch international is set to remain on the bench once again as Bruno Fernandes should keep his place in the attacking midfield role after another impressive show on Tuesday night.

Attack: Edinson Cavani picked up a knock against Southampton but Solskjaer has confirmed the South American will be fit to face Everton so he should continue to lead the line up front this weekend.

Marcus Rashford should keep his place in the Man Utd attack but we could see Anthony Martial recalled after the 25-year-old scored twice off the bench against the Saints. Mason Greenwood may therefore have to settle for a place among the substitutes where he’ll be joined by the likes of Daniel James and Juan Mata. 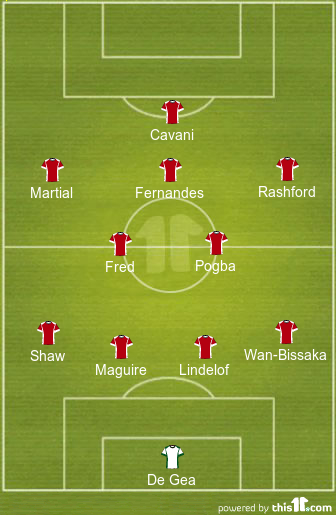