Following their draw against West Brom on Sunday, Man Utd have reassured supporters and rival clubs that the title race is not over yet and that City will not be allowed to simply run away with it.

Man Utd’s less than impressive performance against West Brom on Sunday has left many people questioning whether the lack of consistency in their current results will prevent them from being serious title challengers.

“We need to put up a fight”

Speaking to BBC Sport in a post-match interview, Utd manager Ole Gunnar Solskjaer has insisted that even though City are ‘in great form’ they will continue trying ‘to win games and put City under pressure’. Solskjaer went on to say that for this to be possible, “it looks like us and Leicester, we need to put up a fight”.

This is one of the first times Solskjaer has openly admitted to being in the title race, as in previous interviews, the Utd manager has refrained from committing his team to the challenge, otherwise arguing they are still a work-in-progress.

When Solskjaer was questioned in an interview with Sky Sports about his previous reluctancy to admit Utd are in the title race, he replied saying “I didn’t say we weren’t [in the title race], I said we shouldn’t be talked about [as being in the title race] because 15 games ago you didn’t expect us to be.”

This is perhaps a fair statement to make as recently Utd have struggled to secure wins over teams in the league, conceding late goals and putting in below-par performances. This possibly emphasises the need for further improvement within the squad in order to be considered serious title challengers. There have been concerns voiced about Utd’s goalie David de Gea, alongside suggestions that Utd cannot be considered true contenders until they sign a new centre-back.

Solskjaer went on to highlight the importance of winning every game saying, “we are the team closest [to City]; we should be challenging the team in front of us. We’re not going to let them run away with it. We are playing them soon, but we need to win games to be in that position.”

When asked one more time whether he thought Utd were now in the title race, Solskjaer replied “we are not giving it away early – no were not”. Confirming this in his post-match press conference he said, “we are not going to settle for second of course we are not.”

“VAR must have been asleep”

As previously mentioned, one area of Utd’s squad which needs some improvement is their defence – as seen in the game against West Brom in which they conceded a goal in the first 90 seconds.

However, Solskjaer would pin a lot of the fault on VARs shoulders stating they have failed to show consistency in their decision-making by allowing the West Brom goal to stand. 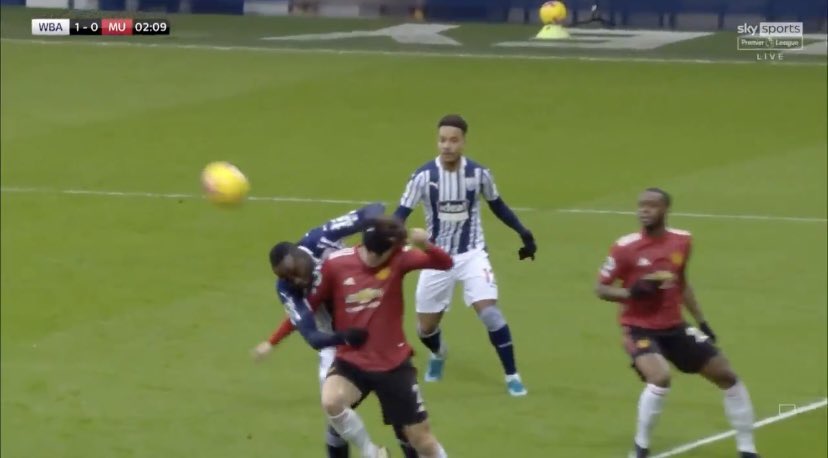 Speaking to BBC Sport, Solskjaer referenced the fact that Harry Maguire’s goal against Burley in a previous fixture was revoked after VAR ruled Maguire fouled the Burley centre-back in the process. Solskjaer argued that the West Brom goal – where the striker appeared to put his hand over Lindelof’s face – was a more obvious foul, stating, “Where’s the consistency? I’m just asking for clarity and for the same decisions every week.”

Later in the game, VAR overturned a penalty ruling after Harry Maguire appeared to be fouled during a Utd set piece. When asked by BBC Sport whether he thought there should have been a penalty, Solskjaer pointed out that Maguire was offside to start with, therefore, “what’s the point of [the referee] going over to the [monitor], it’s offside, so if there’s anyone awake in that VAR room, just tell the ref he’s offside”.

The controversy over VAR decisions continues with each game in the Premier League. Nevertheless, it is arguable that title challengers should be able to win games without having to rely on VAR decisions going their way.

Notwithstanding the disappointing draw against West Brom on Sunday, Man Utd extended their unbeaten away record which now equals 19 games since February 2020. This away record has been a big contributor to Utd’s second-place position in the table, taking 28 points out of a possible 36.

In his post-match press conference, Solskjaer was asked about this record and he replied saying, “at the moment that record doesn’t mean anything. We are in desperate need for three pointers because we want to move up the table and you do not do that by getting one point away from home. So, of course, it’s a disappointing outcome.”

One of Utd’s key players is Anthony Martial who is arguably suffering with a recent dip in form, often being replaced by Edinson Cavani as the central striker. When asked whether he was worried about Martial’s form, Solskjaer said,

“Oh no, I know Anthony is working hard to get back to where he was, and he will score goals. His attitude is very good, so you know, form is sometimes temporary, but class is permanent and the kid’s got class. When he works hard, he knows that he is going to come out with the good performances in the end.”

Overall, Solskjaer argued that Utd have ‘the right attitude and work-rate’ to challenge for the title. However, in order to put pressure on City they have to start winning games and, for Solskjaer, this means ‘producing quality in the big moments’ alongside being more ‘ruthless and clinical’ in their finishing.