Chelsea take on Southampton at St Mary’s Stadium on Saturday lunchtime. Here is the team we expect Thomas Tuchel to select for the game:

Goalkeeper: Number one goalkeeper Edouard Mendy was surprisingly left on the bench for the 2-0 win over Newcastle United last weekend as Tuchel decided to give Kepa Arrizabalaga another chance to impress. However, Mendy is expected to be recalled for this tough away game.

Defence: Tuchel will continue to be without the services of Thiago Silva as he’s still recovering from a muscle injury that’s kept him out of the last few games so Andreas Christensen is set to continue in the middle of the back three.

Antonio Rudiger should also keep his place in the Chelsea defence while Cesar Azpilicueta has been enjoying a run of games since Tuchel arrived so he’s expected to start once again tomorrow afternoon meaning Kurt Zouma will remain on the bench.

Midfield: Tuchel has been rotating his wing-backs so we could see Ben Chilwell recalled against Southampton after missing out last weekend. Reece James is also pushing for a recall on the right flank after being benched against Newcastle.

N’Golo Kante will be hoping to feature this weekend but the French international may have to settle for a place among the Chelsea substitutes as Jorginho and Mateo Kovacic have been Tuchel’s preferred midfield pairing.

Attack: Kai Havertz could return to the squad after recovering from a knock but he may only be deemed fit enough for a place on the bench while Christian Pulisic is a doubt for the trip to Southampton.

Tammy Abraham was able to return to training on Friday after picking up an ankle injury earlier this week so he’ll be assessed to see if he’s in contention, however, Tuchel is unlikely to risk him from the start.

Timo Werner was back among the goals last time out so he’ll be looking to build some momentum and the German attacker could start through the middle against the Saints with Olivier Giroud missing out.

Callum Hudson-Odoi could be moved into a more advanced attacking role if James is recalled at right wing-back while Mason Mount should keep his place in the Chelsea eleven. That would see Hakim Ziyech remain on the bench. 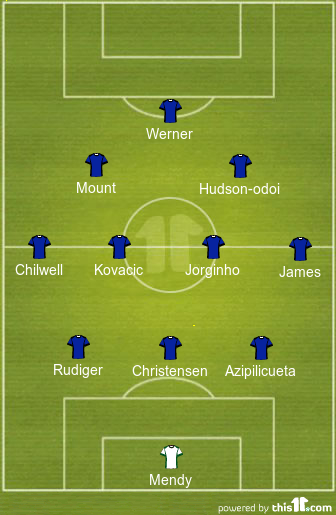