Arsenal take on Manchester City at the Emirates Stadium on Sunday afternoon. Here is the team Gooner Mac expects Mikel Arteta to select:

Goalkeeper: Bernd Leno will once again start between the sticks for Arsenal this weekend with Mat Ryan expected to be his back-up from the bench.

Defence: Kieran Tierney made his return from a knee injury with a second half appearance during Arsenal’s 1-1 draw with Benfica on Thursday night. The Scottish international is likely to be handed a start against City to build up his fitness. Cedric Soares will be the man to make way as Hector Bellerin should retain his place at right-back.

Arteta might freshen things up in the middle of defence with Rob Holding pushing for a recall. David Luiz could keep his place with Gabriel dropping to the bench alongside Pablo Mari.

Midfield: Arsenal will continue to be without Thomas Partey as he’s still nursing a thigh injury that’s kept him out of recent games. Dani Ceballos has impressed in Partey’s absence so he should keep his place alongside Granit Xhaka in the middle of the park.

Martin Odegaard has also impressed in his two full starts for Arsenal so the Norwegian international may retain his place in the number 10 position against Manchester City this weekend.

Attack: Pierre-Emerick Aubameyang was out of sorts on Thursday night and with Arteta expected to rest a few players ahead of the vital return leg against Benfica, the Gabon hitman might be given a breather. Alexandre Lacazette would therefore be recalled up front.

The Gunners boss has spoken about ‘protecting’ Bukayo Saka and the youngster has been virtually ever-present for Arsenal recently so he might be given a rest ahead of the Benfica game – which has to be the priority given our struggles in the Premier League.

Willian is an option to come in but he’s been a huge disappointment since joining Arsenal last summer so Gabriel Martinelli could get a chance to impress this weekend. Emile Smith Rowe has played a lot of football lately so Arteta might give him a breather with Nicolas Pepe pushing for a recall in attack. 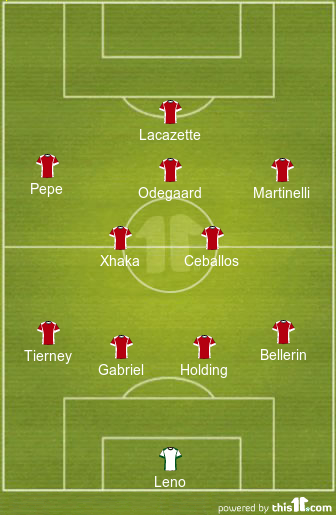