Liverpool will be desperate to get back to winning ways when they travel to Bramall Lane to take on Sheffield United on Sunday night. Here is the team we expect Jurgen Klopp to select for the game:

Goalkeeper: Klopp has refused to discuss whether Alisson Becker will feature following the death of his father in Brazil but the goalkeeper isn’t expected to start. With Caoimhín Kelleher still injured, Adrian is on stand-by to start if Alisson isn’t in the right frame of mind.

Defence: Liverpool still have huge injury problems in defence as Virgil van Dijk, Joe Gomez and Joel Matip all remain long-term injury absentees. Fabinho is back in full training after recovering from a muscle injury but this game is likely to come too soon.

Jordan Henderson has been filling-in at the back in recent weeks but the Liverpool skipper is facing several weeks on the sidelines following groin surgery so the Reds really are struggling in the middle of defence.

Ozan Kabak is certain to keep his place while Nat Phillips is favourite to line-up alongside the Turkish youngster meaning Ben Davies may have to settle for a place on the bench. Trent Alexander-Arnold and Andy Robertson should once again occupy the full-back positions.

Midfield: With Fabinho still not fully fit and Henderson out injured, Liverpool will continue to be without two of their key midfielders but Gini Wijnaldum is expected to keep his place in the middle of the park tomorrow.

Thiago Alcantara should also retain his place despite a disappointing debut campaign in England. Naby Keita is pushing for a recall after returning to fitness recently but Curtis Jones should keep his spot.

James Milner is back in training following a thigh injury that’s kept him out recently but he’s not expected to be ready to start so a place on the bench alongside Alex Oxlade-Chamberlain is the best he can hope for.

Forward: Klopp’s side have struggled for goals lately so the Liverpool boss will be looking for an improved performance in the final against Sheffield United on Sunday night.

Diogo Jota is expected to return to the Liverpool squad for the first time in almost three months after recovering from a knee injury but he’s only had a few full training sessions so he’s expected to be named among the substitutes.

That means Liverpool are likely to stick with the same front three with Sadio Mane and Mohamed Salah once again supporting Roberto Firmino. Xherdan Shaqiri and Divock Origi will have to make-do with places on the bench. 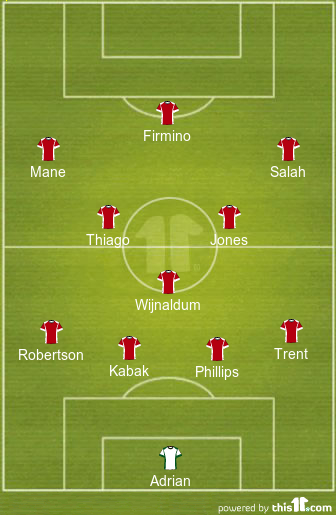